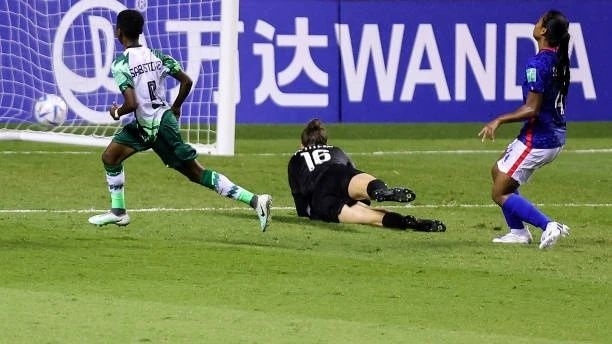 In their opening Group C match of the U-20 FIFA Women’s World Cup on Friday morning, Nigeria’s Falconets defeated France 1-0.

The winning goal was scored five minutes from time by Flourish Sabastine.

Due to heavy rain, center-referee Francia Gonzalez called time on the game in the 20th minute.

For the remainder of the first half, France put the Falconets’ defence under pressure, but their poor shooting let them down.

In the 54th minute, Esther Onyenezide tried a long range left foot shot but it was well saved by the French keeper.

Falconets had a big chance on 58 minutes through Mercy Idoko, but she was denied by France keeper.

France had a goal chalked off for offside nine minutes from time after the referee consulted VAR.

Sabastine fired home the winning goal five minutes from time after she teed up a delightful pass from Mercy Idoko.

Chris Danjuma’s side will take on Korea Republic in their next Group C game on Sunday night.