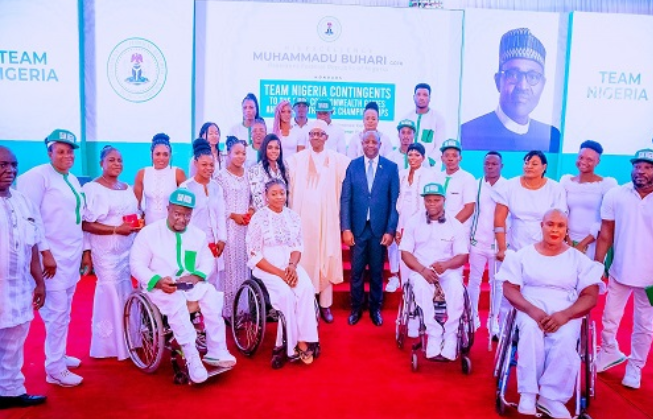 The President also presented an award of recognition to world record sportswoman, Tobi Amusan during a reception for the Nigeria 2022 Commonwealth Contingent in State House, Abuja

Recall that Amusan and Brume played huge roles in the federation’s rising profile.

Brume won a bronze at the delayed Tokyo Olympics to ensure Nigeria’s return to the podium at the quadrennial games 13 years after the country last did.

This year, Brume also ensured Nigeria’s return to the podium at the World Indoor Championships in Belgrade, 14 years after Olusoji Fasuba won a medal at the competition.

The duo also made history at the World Athletics Championships in Oregon, USA in July.

It was an Amusan and Brume show again at the Commonwealth Games in Birmingham as they became the first Nigerian track and field athletes to win individual medals at two editions of the Games.

Amusan became the first Nigerian track and field athlete to successfully defend a Commonwealth Games title while Brume also became the first athlete in the competition history to hit the 7m mark in the women’s long jump event.

Both achieved their golden runs at the Games in record breaking fashion.

Amusan ran a new 12.30 seconds Games record to win the 100m hurdles title while Brume leapt a distance of 7.00m to win the long jump title.