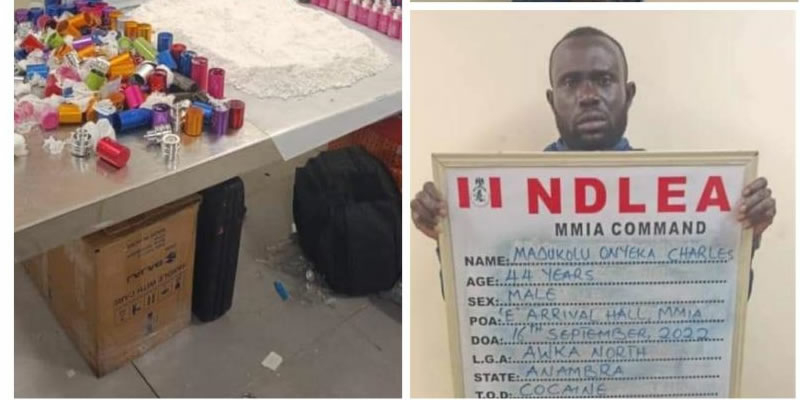 An ex-convict, Onyeka Charles Madukolu, has been arrested by operatives of the National Drug Law Enforcement Agency, NDLEA, at the Murtala Muhammed International Airport, Ikeja Lagos for importing 5.90 kilograms of cocaine concealed in cans of deodorants and lip gloss into Nigeria.

The NDLEA spokesperson, Femi Babafemi, who disclosed this in a statement on Sunday, September 18, said Onyeka was sentenced to seven years imprisonment in Ethiopia for drug trafficking offences and released from prison in 2020.

Babafemi said the 44-year-old was again arrested on Friday 16th September 2022 at the Lagos airport on his return from Sao Paulo, Brazil via Addis Ababa on an Ethiopian Airlines flight.

A search of his luggage revealed he had concealed 5.90kg cocaine inside cans of deodorants and female lip gloss.

During preliminary interview, he claimed to have gone into the drug business to raise fresh capital to start a legitimate business after his release from Ethiopian prison in 2020.

The father of two kids, one each from a Nigerian woman and a Brazilian lady, said he was into motor spare parts business before going into the criminal trade.

The 44-year-old indigene of Awka North Local Government Area of Anambra State said he was expecting to be paid N2million on successful delivery of the illicit drug in Nigeria. 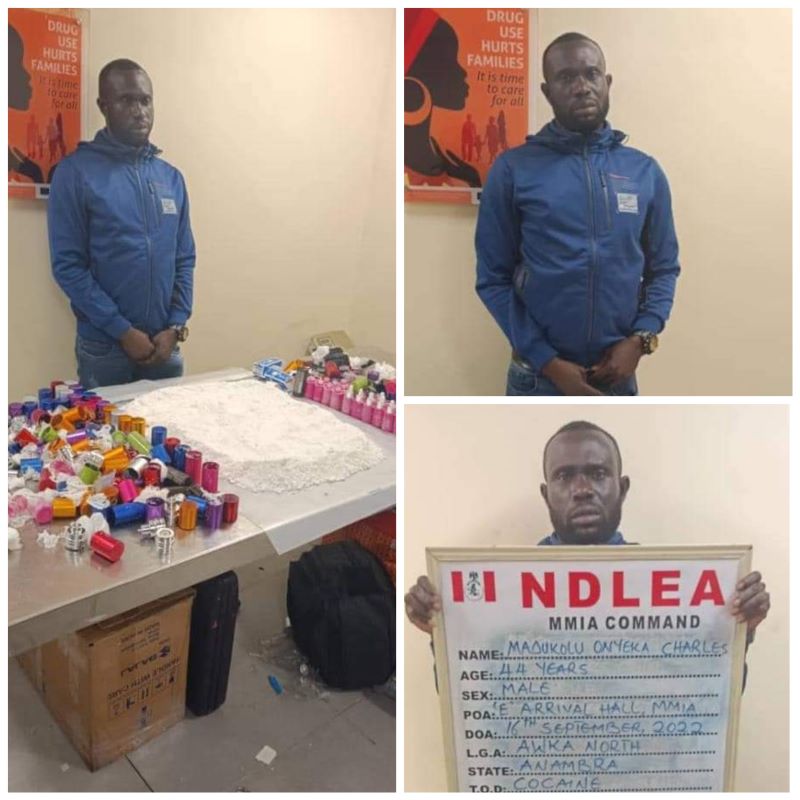 In the same vein, NDLEA operatives had on Tuesday 13th Sept. intercepted another trafficker, Chukwu Kingsley on his way to Rome, Italy on an Asky Airline flight.

A search of his luggage shows he had concealed among food condiments 11,460 tablets of tramadol 225mg with a gross weight of 5.7kg and 39 bottles of codeine syrup.

The 49-year-old suspect is a known haulage agent who hails from Oru West Local Government Area of Imo State.

Also at the Lagos airport, a freight agent, Lawal Adeyemi was arrested same day for attempting to export some sachets of lexotan among other non-controlled drugs to Liberia, while operatives equally seized 593.90 kilograms of khat leaf at the NAHCO import shed of the airport on Thursday 15th Sept. after a joint examination of the cargo by a combined team of security agencies.

Meanwhile, a notable producer of new psychoactive substance, popularly called Akuskura, Qasim Ademola has been arrested by anti-narcotic officers who intercepted 26, 600 bottles of the illicit substance meant for distribution across Northern states.

The consignment was seized on Thursday 15th Sept. along Zaria-Kano road, Gadar Tamburawa, Kano while the 39-year-old proprietor from Akinyele LGA, Oyo state and three of his distributors were arrested in follow up operations.

In Kogi state, operatives on patrol along Okene-Abuja expressway on Saturday 17th Sept. intercepted a J5 vehicle coming from Onitsha enroute Kaduna-Zaria with 18 pieces of pump action rifles and 1,300 cartridges, while the two suspects conveying the arms and ammunition, Chukwudi Aronu, 51, and Shuaibu Gambo, 23, were arrested.

Another suspect, Anthony Agada, 37, conveying 1,000 cartridges, was equally nabbed in a bus coming from Onitsha to Abuja same day, while 1,404 bottles of codeine syrup and 2,040 ampoules of pentazocine injection were seized from another vehicle coming from Onitsha enroute Sokoto, with the receiver, Stanley Raymond, 39, and the sender, Shadrack Ifediora, 46, arrested in follow up operations in Sokoto and Anambra respectively.

No less than 335.1kg of cannabis was also seized in a raid at Kwanar Kundum area of Bauchi town, with two suspects: Usman Garba and Najib Ibrahim, arrested.

While directing the Kogi state command to immediately hand over the arms and ammunition seized to the police for further investigation, Chairman of the NDLEA, Brig. Gen. Mohamed Buba Marwa (Retd) commended the officers and men of the command as well as their counterparts in MMIA, and other states for their vigilance and resilience.

He charged them and others across the country to remain focussed as they daily discharge their responsibilities.