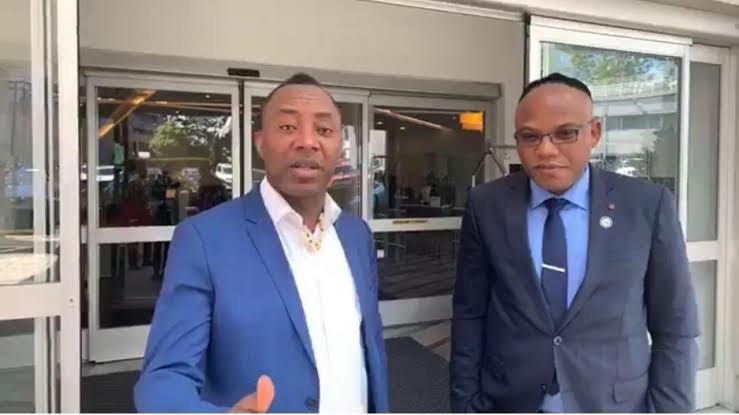 Officials of the Department of State Service, on Thursday, in the Federal Capital Territory, Abuja, allegedly denied human rights activist and presidential candidate of the African Action Congress, Mr Omoyele Sowore, access to detained leader of the Indigenous People of Biafra, Nnamdi Kanu, despite granting him a formal invitation.

Sowore was listed among those expected to visit Kanu as requested by the IPOB leader on Thursday. A document revealed.

The activist who arrived at the facility at about 2 pm at the appointed time was asked to sit in the visitor’s waiting room till about 4:50 pm, and eventually, the officials denied him access to see Kanu.

Narrating his ordeal at the DSS facility to journalists, Sowore said Kanu’s father-in-law, who was also at the facility to visit him was brief in his visit to enable him (Sowore) to take his turn since the service could permit only one person at a time.

Sowore said, “His lawyer made an application for me to visit him with a lawyer who is also his father-in-law. His father-in-law, when he came back, said Kanu was eager to see me and that was why he left on time to enable me go in and see him.

“I waited for another 20 minutes and we had to approach them to know what was going on. They said, ‘sorry, Mr. Sowore, the time of visitation has elapsed’ and that was how I was denied opportunity to see him.

“So I am going to be pushing for a visitation but this time around when I am going, I am going to invite everybody to come with me, anybody who is willing to come.

“But I am very disappointed. They think they can play games with some of us who are interested in seeing him freed as soon as possible. He hasn’t committed any crime to have warranted him extradition from Kenya.

“I know how sensitive they are about this. They have attacked me several times. But what is important is his rights and the rights of his people, the rights of Africans to seek whenever they want; their rights, either to self-determination, liberty, freedom of association are not only enshrined in our constitution, but also guaranteed by international organisations.”

The IPOB leader is being prosecuted over allegation of treasonable felony preferred against him by the Federal Government.

He is facing seven counts after eight counts were struck out by the court.