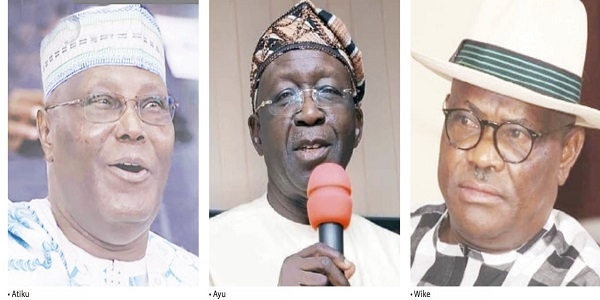 According to him, he gathered the funds to rig the primary election in Atiku Abubakar’s favour.

In an explosive news conference on Friday, Wike claimed that Ayu had called on candidates to drop out in favour of Atiku, adding that he, the former Senate President Bukola Saraki, and other individuals were present.

“He manipulated the delegates. There was nothing Ayu did not do to ensure Wike didn’t emerge. Ayu is corrupt. Quote me. I am a lawyer and I am the governor of Rivers State. Ayu collected N1 billion in Lagos.

Jaafar Debunks Report Of Ahmed Lawan Been Behind Tinubu’s Problem

“He told one of the PDP presidential aspirants before the primary that the governors were not ready to fund the party.

“I know how the money was arranged and those involved in packaging the money. He collected the N1 billion. Let him come out to tell Nigerians it is not true and I will reveal more,” he stated.

Wike also said the APC Presidential candidate, Asiwaju Bola Tinubu wooed him to join the ruling party with a senatorial ticket, which he turned down.

“I didn’t contest so I can become a vice presidential candidate, I am not like others who were not serious and bought senatorial form alongside presidential form and that’s why when Tinubu offered me senate slot, I didn’t go for it,’’ he said.

The governor said asides Tinubu, he was approached by other political parties, which included Labour Party as they all knew his worth.