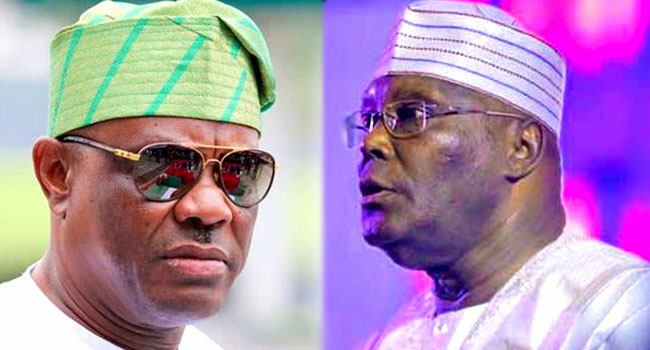 Former Vice President and presidential candidate of the Peoples Democratic party, Atiku Abubakar, has said that the crisis currently rocking the party is a family feud which will soon be resolved.

According to him, what is going on in the party is a political disagreement and not a war of attrition.

This was stated by Atiku while speaking at the 35th anniversary celebration of Akwa Ibom State held at the Godswill Akpabio International Stadium, Uyo on Friday.

The PDP presidential candidate who was represented by the Governor of Sokoto State and Chairman, Nigeria Governors Forum, Alhaji Aminu Tambuwal said that party will come out of the crisis stronger and better positioned to win the 2023 elections.

He said, “Yes, we must acknowledge that we are having internal family issues, but be rest assured that we are not involved or engaged in the war of attrition. It is a political disagreement and very soon, all of that will be resolved and the PDP will continue to remain strong, and grow untill we win the election, by the grace of God, come February 2023.

Atiku who was the Special Guest of Honour congratulated Akwa Ibom State and her people for an all-round growth in all spheres of development in the past 35 years.

“We have seen progress, we have seen development in virtually all the areas of life under your leadership  in Akwa Ibom state, only God Almighty can reward you,” he said.

He urged the people of the state to remain steadfast in support for the party and be hopeful that the PDP will take over power at the center in 2023.

Governor Udom Emmanuel in his address marking the event charged Akwa Ibom people to stick to the path which saw the state to her current position as one of the frontline states in Nigeria.

Emmanuel who paid glowing tribute to former Military Administrator, Gen. Ibrahim Babangida, for creating Akwa Ibom, and past leaders  for laying solid foundation for the growth the state is currently experiencing, declared the downpour on the occasion of the state anniversary celebration is a sign of God’s approval, showers of blessing and open heaven  for Akwa Ibom State and her people.

He maintained that the future of Nigeria lies with the Peoples Democratic Party and therefore charged Akwa Ibom people to stand on that path of progress. assuring that the next PDP administration would reward the state for her huge resource contributions.

“Let me thank past leaders of the state for building a state as strong as this.

“Let me assure you that we have touched all aspects of governance in the past seven years and in the last 35 years.

“Fellow Akwa ibomites, I stand here to report that we have done exceedingly well. Akwa Ibom State today, I can boast and beat my chest  has one of the most world-class network of economically viable roads constructed and commissioned by this administration.

“We thank God for 35 years as a people and to show that God is with us, God has sent us showers of blessing, God has opened the heavens on a land blessed by God.