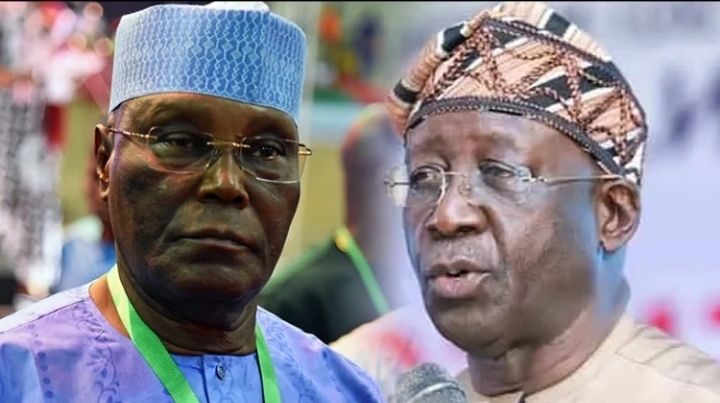 Despite serious allegations of corruption heaped on his office, the National Chairman of the Peoples Democratic Party, PDP, Chief Iyorchia Ayu is expected back to Nigeria today, Friday.

Ayu is returning to Nigeria to face a court of public opinion, with his colleagues in the National Working Committee, NWC.

Barely one week ago, Governor of Rivers State, Nyesom Wike in what appears to be blowing the lead, had accused Ayu of engaging in corrupt practices.

However, not many took Wike’s allegations seriously, considering his long drawn war with the chairman ever since the party conducted its presidential primary election, which Wike lost to Alhaji Atiku Abubakar.

Wike, answering questions from journalists, alleged that Ayu received N1 billion from one of the presidential hopefuls in the party.

He went further to say that Ayu is corrupt, and that the chairman cannot deny that he received the money but refused to remit it to the party’s account.

“Ayu is very corrupt. I’m totally informed. Ayu has the opportunity to challenge me, I will name the person.

“Some of the governors can tell you. Will he deny the fact that he didn’t collect N1 billion from Lagos? Let him deny it, I will tell him who gave him the money not from the Lagos state government, the money was given to him in Lagos.

“He met one of the presidential candidates and told him that he’s not sure these governors may want to sponsor the party.

“That money did not enter into the account of PDP, but we are not attacking Ayu on that basis.”

That was a strong cannon shot from Wike but no reply came from Ayu who has been outside the country.

However, while Nigerians were still expecting Ayu to reacto the grave allegations, more can of worms were opened on Thursday, with at least four members of the Ayu-led NWC rejecting suspicious money paid into their accounts.

The money totalling over N122 million has already been returned to the PDP account, with each of the recipients dropping a note for Ayu.

Details in their letters show that Arapaja got N36 million, Adagunodo, Orbih and Effah-Attoe got N28.8 million each.

Orbih, in the letter he addressed to Ayu said, “My attention has been drawn to a damaging trending story reported in THE NATION Newspaper by Yusuf Alli on September 26, 2022 titled ‘Disquiet in PDP NW over N10 billion nomination fees.’ Amongst several other allegations, he alleged that members of the NWC were offered N28 million to gloss over scandalous financial misappropriation.

“To my shock and surprise, it has been confirmed to me by my bank that the sum of N28, 800,000. (Twenty eight million eight hundred thousand Naira) has been credited to my account by the party. I hereby notify you of my decision to pay back the money to the party’s account.

DAILY POST reports that other members of the NWC wrote similar letters to Ayu, indicating their rejection of the questionable fund.

One of them, Effah-Attoe said upon enquiry, she was told the money was meant for her two-year rent.

She, however, said phone calls from party members, friends, family members and the general public, were suggestive that the money was a bribe “to bring me and other NWC members on the side of The National Chairman, following the crisis between him on one side and the Governor of Rivers State, H.E Governor Nyesom Wike/ Wike’s Group on the other side.”

The development is said to have unsettled the PDP top hierarchy, including the camp of the presidential candidate, Atiku Abubakar, who see the unfolding events as not good for the party, especially with the commencement of campaigns.

“Remember that one of the reasons the party was voted out in 2015 was owing to monumental corruption in governance; now this is happening.

“The feeling everywhere is that Wike has been proved right; there is disquiet everywhere.

“This is happening at a very bad time because it will be difficult for the party to go and talk to the electorates about anti-corruption when its house is tainted with several unresolved fraud allegations.

“Frankly, most of the party leaders are in shock over this development and the most honourable thing for the national chairman to do now is to resign. This is no longer about Wike. If Ayu has the interest of the party at heart, he should just give way.

“There is no way he can lead the party into a general election with this kind of baggage; it will be difficult to clean this mess before the election,” the top party source said.

As of the time of filing this report, there is still graveyard silence from the PDP leadership over these allegations.

Resign, hand yourself over to EFCC – HURIWA to Ayu

Meanwhile, a civil rights activist, Comrade Emmanuel Onwubiko, National Coordinator of the Human Right Writers Association of Nigeria, HURIWA, has said the happenings in the PDP was an indication that the party had not changed from its old ways.

Onwubiko told DAILY POST that the right thing was for Ayu to resign and surrender himself to the Economic and Financial Crimes Commission, EFCC.

According to him, “The corruption unearthed in the hierarchy of the Peoples Democratic Party, PDP, as disclosed by some notable leaders and members of the National Executive Committee of the party who refunded humongous bribes paid into their account allegedly by Iyorchia Ayu shows that it is difficult for a Leopard to change its colour.

“Both the PDP and the All Progressives Congress are twin evils because in both of their leaderships there is total absence of accountability and transparency and this is because of how the Chairmen of these parties emerged through corrupt means.

“PDP Chairman should do his party the favour of resigning and handing himself over to the Economic and Financial Crimes Commission, EFCC, for investigation and possible prosecution.

“It is a crying shame that the PDP that ought to work hard to convince voters about its determination to push out the absolutely corrupt and power drunk government of President Muhammadu Buhari is itself weakened by avarice, greed and corruption.

“It’s a big opportunity for voters in Nigeria to be determined to sack both the PDP and the APC.”