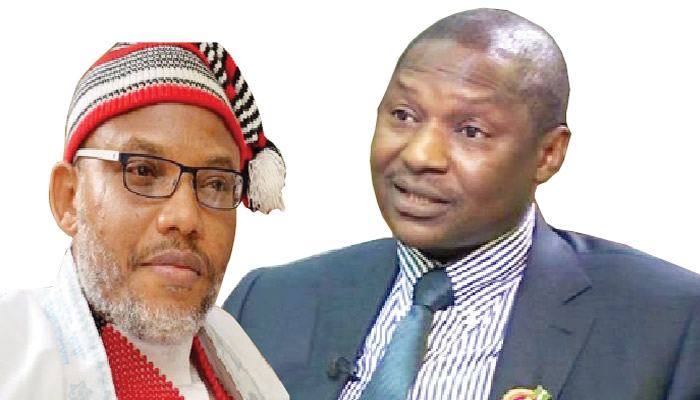 The Attorney General of the Federation and Minister of Justice, Abubakar Malami, has reacted to the judgement of the Court of Appeal in Abuja on Thursday quashing the charges against the leader of the Indigenous People of Biafra, Nnamdi Kanu, saying that Kanu was only discharged by the court but not acquitted.

In a statement signed and released Thursday night by Malami’s Special Assistant on Media and Public Relations, Umar Gwandu, the AGF said the court’s decision was on a single issue that bordered on rendition.

The statement added that there were other issues predating Kanu’s rendition “on the basis of which Kanu jumped bail” which remained “valid issues for judicial determination.”

It further stated that the Federal Government would continue to pursue determination of pre-rendition issues while considering all available options on the judgement on rendition.

The statement read, “The Office of the Attorney General of the Federation and Minister of Justice has received the news of the decision of the Court of Appeal concerning the trial of Nnamdi Kanu. For the avoidance of doubt and by the verdict of the Court, Kanu was only discharged and not acquitted.

“Consequently, the appropriate legal options before the authorities will be exploited and communicated accordingly to the public.

“The decision handed down by the court of appeal was on a single issue that borders on rendition.

“Let it be made clear to the general public that other issues that predates rendition on the basis of which Kanu jumped bail remain valid issues for judicial determination.

“The Federal Government will consider all available options open to us on the judgment on rendition while pursuing determination of pre-rendition issues.”