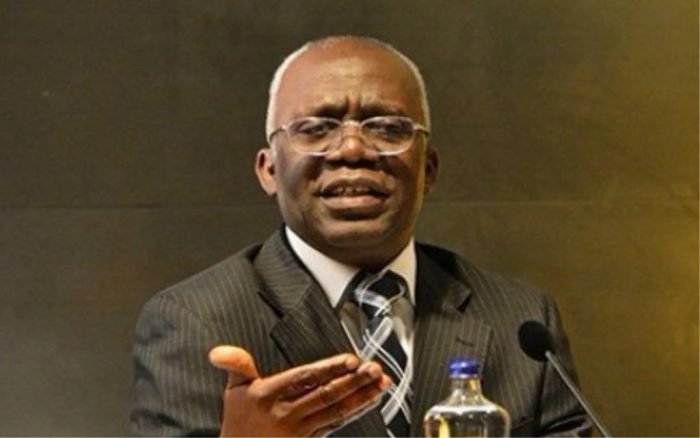 The management of Tantita Security Services Nigeria Ltd (TSSNL) says the decision of the Chief of Defence Staff (CDS), General Lucky Irabor, to destroy a vessel used in siphoning crude oil from Nigeria does no contravene any law.

The security service was reacting to the assertion of Femi Falana SAN who opined that burning of the vessel is tantamount to destruction of evidence for prosecution.

Falana had, on Monday, issued a press statement condemning the action of the naval authorities as well as demanding the head of General Irabor who had said the destruction of the vessel was in line with Armed Services Rules of Engagement.

He said burning of the vessel was in line with extant laws.

He said Falana’s reliance on Section 111 of the Armed Forces Act, to describe the destruction of the ship as arson was incorrect.

“It will appear that Mr Falana’s real grievance was that this particular pipeline surveillance contract was awarded to a company associated with Chief Ekpemupolo alias Tompolo.

“Mr Falana is not the first to raise hackles over this issue. Some governors from the West of Nigeria have complained about this.

“No one knows what their real grouse is, but perhaps it will be better for them to state what offends their sensibilities rather than raise non-issues of legality,” he averred.

Jakpa further argued that the naval authorities who destroyed acted within their rules of engagement.

According to him, “while Falana relies on the Armed forces Act, it is our humble opinion that the applicable law is the Hydrocarbon Oils Refining Act. Section 15 of the Hydrocarbons Oil Refining Act provides as follows: ‘If any officer has reasonable grounds to suspect that any refining of hydrocarbon oils contrary to the provisions of this Act is being carried out on any land or premises, he may enter thereon, if need be by force, and dismantle or seize any apparatus and equipment used for or in connection with such unlawful refining.

“The purpose of taking the crude from the wellhead was certainly for illegal refining, whether here or abroad.

“This clearly brings the vessel within the ambit of this law. And this law permits dismantling the apparatus or equipment used for illegal refining. Scuttling the ship was to dismantle it.

“Section 1 of the Act already outlawed any act connected with refining without a license when it provided that, ‘Subject to the provisions of this Act no person shall refine any hydrocarbon oils save in a refinery and under a license issued under the Act.

“Section 18(1)(b) of the law gives the power to the government to levy distress (seizure) on all equipment, plants, tools, ships, vehicles, animals or other goods or effects whatsoever used in the refining, sale or distribution, sale of hydrocarbon oils found in any premises or any land… etc” used in violation of the Act.

“Some would argue that levying distress is not destruction, but apparently the Act contemplates that destruction is included in the case. See Section 25 of the Act.

“Importantly, Section 18(5) of the Act places the burden of proof that the action of such an officer (acting on behalf of the Government) is wrong on the person claiming that their property was wrongly destroyed.

“Section 25 provides that where the person claiming ownership of the property is able to satisfy the court whether, in a civil or criminal proceeding brought against a person authorized by the Act to seize or detain anything that the government is liable, nothing in the Act shall affect the right of that person to the return or the thing seized or detained, or to compensation in respect to any damage to the thing or in respect of the destruction thereof. This is the proviso to S.25(2) of the Act.

“This clearly supports the rules of engagement cited by the CDS, seizure may result in destruction and where the owner is able to prove that the officer was wrong to detain or destroy his property he will be entitled to compensation in full.

“Therefore, the CDS was right. And a person cannot be liable for an offence if he was authorised by law to do the act complained of.”

While saying the burning of the vessel will act as a deterrent to others, Jakpa called on all well-meaning Nigerians to support the decision of NNPC to find credible partners to rid the country of the menace of illegal bunkering once and for all.

Recall that TSSNL had effected the vessel’s arrest alongside its seven-member crew, on October 6, 2022, on the creeks of Escravos, whilst crude oil was being loaded illegally into the ship.

About 600 to 650 cubic metres of illegally lifted crude oil in five compartments were said to be on board the vessel with Reg. No. L85 B9.50 as of the time it was arrested and handed over to the military.

The vessel was, on October 10, burnt by naval officers on Warri River, an action that has drawn reactions from different quarters with specific blame on the Nigerian military for not only polluting the environment but destroying the evidence with which to prosecute the seven arrested suspected.