NSCDC Ready To Provide Security For Elections In Zamfara – Commandant 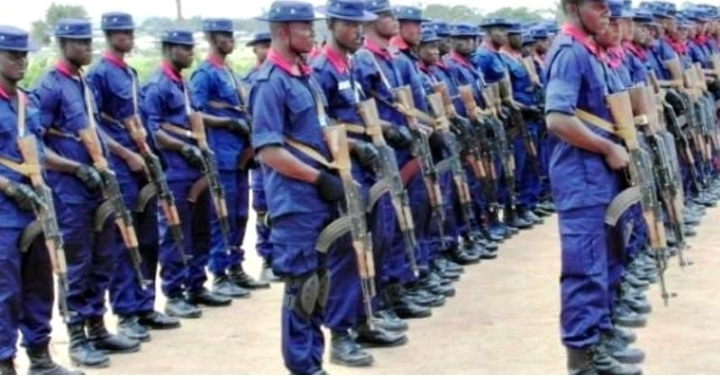 The Nigeria Security and Civil Defence Corps (NSCDC) Zamfara State Command has reaffirmed that its troops will uphold a high standard of professionalism to safeguard the lives and property of the populace.

This information was provided by the Commandant, Mohammad Bello Muazu, who also gave the assurance that the Corps members in Zamfara State Command will maintain order and neutrality throughout the time of electioneering in preparation for the 2023 elections.

Commandant Muazu made the comments when state representatives of the National Human Rights Commission Zamfara State chapter paid him a courtesy visit in the State. He asserted that officers and men of the Corps are professionally trained to ensure the protection of lives and properties, critical infrastructure, and national assets.

The State NSCDC boss opined that the Corps being a stakeholder in election matters will do all it can to ensure a smooth 2023 electioneering period.

He reaffirmed that the confidence built in the Corps by the general public over the years will be maintained, sustained and strengthened.

Commandant Muazu told the Human Rights group that NSCDC is poised to close ranks with other sister agencies to forestall any sorts of insecurity that could hamper the participation of electorates in the exercise of their civic obligations as enshrined in the constitution of the Federal Republic of Nigeria.

The commandant also said the Corps under his watch will act in line with the visions and missions of Dr, Audi Ahmed Abubakar which are to reposition, rejuvenate, restructure, and revigorate the Corps in line with international best practices.

Commandant Muazu agreed to collaborate and synergize with the Human Rights Commission in Zamfara State to effectively sanitize the electoral processes in line with the extant laws of the Federation.

Meanwhile, the State Coordinator of the National Human Rights Commission in Zamfara State, Abdullahi Abubakar, eulogized the Corps especially, Commandant Muazu for the partnership and collaboration enjoyed with the Corps so far.

The State Coordinator said the pedigree of Commandant Muazu has showcased his level of professionalism and leadership prowess.

He appealed to the Corps for more synergy and understanding in handling electoral matters.

Mr Abdullahi Abubakar said the essence of the visit to the Corps was to revigorate the understanding and partnership that hitherto existed between the Corps and the NHRC, especially as the electioneering activities which are build-ups to the 2023 General Elections, draw closer