JUST IN: 20 feared dead, many injured as petrol tanker goes up in flames in Kogi 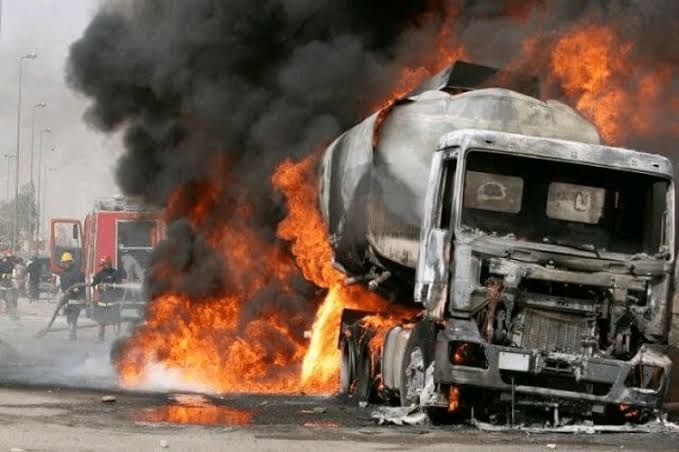 Twenty people have reportedly burnt to death in a tanker accident that occurred near Ochadamu junction in the Eastern flank of Kogi State.

The accident was said to have occurred around 2:00 p.m. on Thursday.

Eyewitnesses disclosed that those who died were burnt beyond recognition while up to 30 vehicles got burnt.

“I learnt that the accident was caused by a disagreement between soldiers and tanker drivers. Soldiers reportedly shot two tanker drivers and their colleagues in anger, and used a tanker loaded with fuel to barricade the highway leading to the ancient town of Idah. People gathered and pleaded with the tanker drivers to remove the tanker that they used to block the road but they refused,” a source told Tribune.

According to him, “suddenly, a speeding coal truck ran into the petrol tanker, causing it to  go up in flames, killing scores of people and injuring many others.”

The source said no fewer than 20 corpses were counted while about 50 people sustained varying degrees of injuries.

Officials of the Federal Road Safety Corps, when contacted on the incident,  said they were still at the spot, with one of them pleading for more time to get the true picture of the casualty figure.

“My officers are still busy and vehicles are still burning as we speak .I will get back  with detailed information as soon as possible,” the official said.