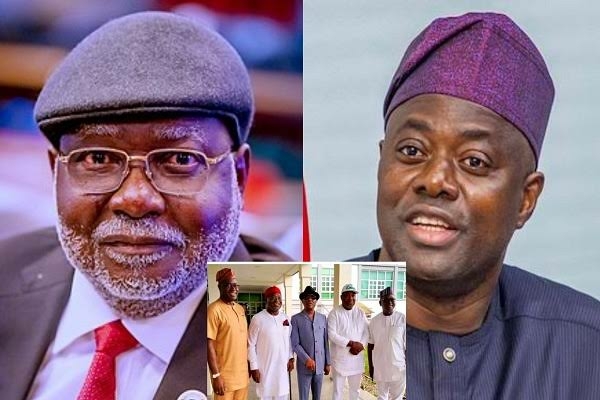 WITHIN NIGERIA, Barrister Ahmed Raji, National President of the Oke-Ogun Development Consultative Forum (ODCF), has come out to oppose the stance of one of the party’s flag bearer, Atiku Abubakar’s aides.

According to him, the report that attributed the CJN’s comment about Makinde’s membership in the five disgruntled PDP governors known as the G5 to political fraternization is false and misleading.

Raji’s reaction follows a statement issued by Phrank Shuaibu, an Atiku campaign Special Assistant on Public Communications, in which he accused the CJN of fraternizing with the G5 governors by endorsing Makinde’s membership in the group.

WITHIN NIGERIA reported earlier that Shuaibu, among other things, observed that;

At the event, Justice Ariwoola warned judges to remain neutral and impartial during this political season. He also warned politicians against trying to induce judges.

However, it may seem the honourable CJN is not ready to lead by example going by his recent utterances and open and blatant hobnobbing with politicians.

According to reports, Raji criticized the report in a counter-statement, stating that journalists should scrutinize their information and adhere to the tenets of journalism in order to avoid feeding the general public incorrect information that could jeopardize the integrity of the individual involved.

I also attended the event and did not hear the CJN discuss partisan politics but only joked about the closeness that existed between the two governors.

I was at the said occasion at Port Harcourt and there was never a time the Chief Justice of the Federation said anything about being in support of the group of PDP five governors, he only made jokes about how the closeness between the Oyo State governor and governor Wike is strong which he attributed to the fact that Governor Wike is the in-law of Seyi Makinde.

For anybody to think the Chief Justice of the Federation will come down to a such level as discussing party issues is ridiculous, I enjoin media organizations to please scrutinize information their reporters bring to them to avoid creating crisis and smear the images of people.

Meanwhile, the CJN at a banquet in Port Harcourt, Rivers state on Thursday night where he was invited by the State Governor, Nyesom Wike to commission a project in the state said he was happy that Makinde was a member of the G5 Governors of the PDP.

The CJN observed that;

That is why we should not be scared to have these men of the integrity group.

And I am happy that my own Governor is among them because he would try to imitate his friend and in-law because we came here to marry for my governor.

So, Governor Wike will always threaten that he will call back his sister if my Governor fails to play ball. That is why you see him following his Excellency (Wike) because my Governor is afraid of his wife being recalled.