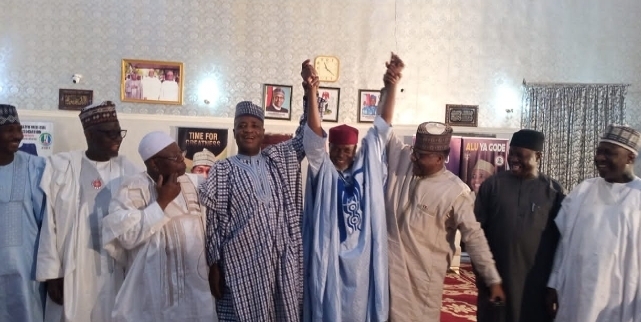 The Sokoto State Peoples Redemption Party’s whole party structure has disintegrated into the state’s All Progressives Congress with only a few months until the general elections in 2023.

The whole party apparatus, led by Sa’idu Muhammad Gumburawa, its candidate for governor, has switched to the APC.

Sa’idu Muhammad Gumburawa, the party’s head and the state’s gubernatorial candidate, informed Senator Aliyu Wamakko, the leader of the APC, that the group had decided to leave the previous party in order to do their lot to ensure the APC’s triumph in 2023.

He further explained that considering the situation the people of the state found themselves under the PDP-led government, they came to APC to team up with its leaders and win the elections squarely so that the state will come back to its lost glory as it was during the administration of the former governor, Aliyu Wamakko.

Speaking in his remarks while welcoming the defectors into APC, Wamakko described Gumburawa as a friend and partner in progress.

He expressed happiness by his coming to APC and described APC as a party for all those who want Sokoto State developed.

He assured Gumburawa that APC will work with him and all his teeming supporters closely so as to ensure a harmonious working relationship all the time.

Also speaking, APC governorship Candidate in the state, Hon. Ahmad Aliyu Sokoto, while congratulating Gumburawa and his allies for joining APC, assured him of equal treatment like all APC family members.

Ahmad Aliyu pledged to carry everybody along if given the mandate to govern the state so as to ensure the provision of quality healthcare delivery, educational development, boosting trade and investments, agricultural enhancement, civil servants’ welfare and other developmental aspects.

The mini event which was held at the residence of APC leader, Senator Aliyu Magatakarda Wamakko was attended by the APC Senators who represent Sokoto East and South Senatorial Districts, Ibrahim Abdullahi Danbaba Dambuwa and Engr. Ibrahim Abdullahi Gobir.