Zulum Orders Prosecution Of Culprits Behind Political Violence In Borno 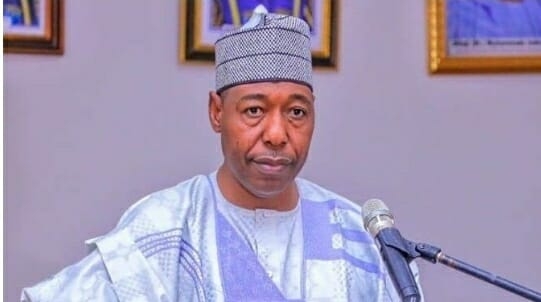 Borno State Governor, Professor Babagana Umara Zulum, has expressed regret over reports of violence during the recent campaigns of the All Progressives Congress, APC, and the Peoples Democratic Party, PDP.

In a statement issued on Thursday by his spokesman, Malam Isa Gusau, Zulum asked the Borno State Commissioner of Police to conduct an investigation and guarantee that all perpetrators are apprehended and convicted.

Remember that a viral video depicted a confrontation of political thugs during the Borno Central senatorial campaigns in several Council areas, including the burning of some makeshift buildings depicting PDP flags in Banki, Bama Council Area.

Reacting Zulum said, “I have received reports on renewed acts of political violence in the state. I strongly condemn these extremely unnecessary acts of violence and hereby direct the Commissioner of Police and the DSS to immediately investigate and ensure anyone involved is made to face the full wrath of the law.”

“I am directing heads of security agencies under the Borno State security council to immediately convene a meeting with critical representatives of all major political parties, particularly the APC and PDP, get them to sign undertakings and strikingly warn against all acts of violence with punitive measures rolled out for any culprit, especially politicians who might be instigating violence, no matter how highly placed they might be.”

“In the meantime, I strongly urge supporters of all political parties not to disseminate false statements that can insight violence. We should endeavor to promote peace”.

“I have always been against political thuggery and for us in Borno State, we have seen enough of violence from our over 12 years of insurgency. Instigating political violence is simply being ungrateful to Allah for the peace He is granting us after over 12 years of prayers for His divine intervention. Many soldiers, policemen, personnel of the DSS and paramilitary as well as our volunteers in the Civilian JTF, hunters and vigilantes have given their lives in battles and many are still in the front lines, towards full restoration of peace in Borno State. Insha’Allah, we will not allow anyone reverse the supreme sacrifices of our armed forces and volunteers.”

“With the peace gained so far across Borno State, we have safely resettled close to one million internally displaced persons and refugees in rebuilt communities. Our focus, which is very firm, is to sustain our ongoing construction of 10,000 new houses and rehabilitation of thousands of destroyed houses to continue our safe and dignified resettlement, alongside the provision of livelihood support so that our fellow citizens can eventually cater for themselves through productive agriculture and other businesses in ways they can live without depending on the food and cash aides we are currently giving based on our routine humanitarian needs assessments for all communities.”

“I urge all stakeholders of political parties in particular, party executives, candidates and campaign teams to desist from any form of violence and to campaign peacefully and in accordance with all provisions of the electoral act and laws of Borno State. For me, electoral victory should be one that is earned not one that is forced through acts of violence.

“It is Allah that gives power to whoever He wills but that divine declaration by the Almighty Allah doesn’t include using unlawful means to acquire power. Moreover, for political offices to be meaningful, societies for which such offices are established, must first exist and do so safely. That safe existence of societies, is the fundamental basis of government and insha’Allah, we will ensure that Borno State Government lives to that sacred purpose of guaranteeing public peace and public freedom.” Zulum concluded as quoted by his spokesperson.

Meanwhile, a Chieftain of the All progressives Congress in the state, Hon Babagana Yusuf Banki has denied the rumors currently being circulated by some mischief makers, that the ruling party, APC was involved in the burning of PDP office in Banki town during yesterday’s Senatorial campaign rally in the area.

“To put the record straight as a resident of the Banki town and a stakeholder, some PDP thugs on the eve of the APC rally erected a temporary shed made up of thatch roof smoking indiscriminately just to show the little presence of the opposition party with the intention to cause trouble and gain cheep popularity.” He said.

Yusuf Banki added that it was the PDP thugs that upon sighting the crowd of APC supporters and the campaign procession into Banki with Barrisyer Kaka Shehu Lawan, the senatorial candidate, started abusive words to the extent of throwing stones at the convoy which led to the damaging of windscreen of some vehicles belonging to APC members, this did not go down well with some aggrieved APC supporters who attempted to revenge.

He also categorically stressed that not a single Civilian Joint Task Force (CJTF) member was involved in the fracas that ensued as alleged by the PDP, as none of CJTF member was seen in the purported video now in circulation.

He, therefore, urged members of the public to ignore such rumours of attacks by APC supporters as alleged, even as he challenged the opposition PDP to come out with any concrete evidence to back up their allegations against the ruling party and its law abiding members.