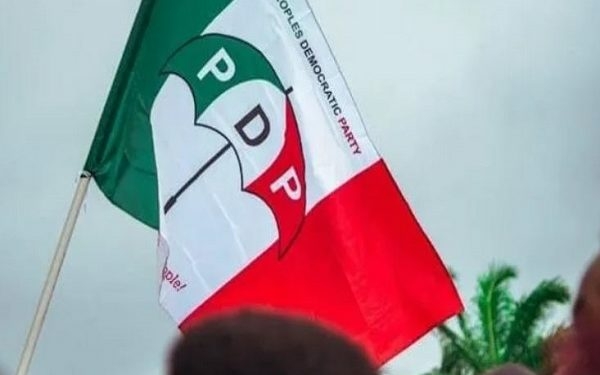 Before the upcoming general elections in February, the Peoples Democratic Party (PDP) youth wing in Ondo State has urged party officials and other stakeholders from the state’s Akure Local Government Area to put down their weapons and embrace peace.

The youths who made this claim during a press conference in Akure remarked that the ongoing internal conflict plaguing the party in local government is becoming “messier” and may have an impact on the party’s prospects in the general elections of the following year.

Speaking at the occasion, Mr. Ajayi Olorunlogbon, the youth leader for Akure South Local Government, voiced his discontent over the situation and urged the party leaders to put the conflict behind them and focus on the party’s success.

The party had been enmeshed in a deep crisis following the outcome of the party primaries to select the candidates for the 2023 election and the war of supremacy among the leaders of the party in the local government area.

Olorunlogbon said there was a need for the leaders to close ranks and shelve their personal interests in the overall interest of the suffering residents of the state who were looking up to the opposition party to bring succour to them.

They, however, gave the aggrieved leaders a week’s ultimatum to settle their crisis or face their anger, saying the party cannot afford to lose in the election because of the s3lfish interest of the leaders.

Another youth leader, Mr. Adekanbi Oluwatuyi said members of a political party are meant to be individuals bonded by common interests to win, retain and manage political power on behalf of the citizens, saying the internal rancor in the party in the local government may weaken its influence during the elections.

He said: “From the youth angle, we want to warm everybody that is the benefactor of this crisis, irrespective of position or age.

“We are begging them to desist, unity is not anything one person can achieve, it is what all of us must come together and push for.

“If you believe that you are capable of causing a crisis in this party, the moment we identify you, we will deal with you. As youth, we constitute an integral part of every society and in Akure here, in PDP, we have all paid our price.

Considering this crisis, we converge to appeal to all our leaders that they should come together and form a united body. In unity, we gain a lot of things in the division we gain nothing more than miscreants disturbing the peace of the party.

“We have begged and visited our leaders to settle their differences but all to no avail. We have a chance this time around and we believe that we are going to win the 2023 elections.

We are not going to fight ourselves because of any leader. As we speak today, the presidential candidate of PDP is our man, for Ondo central, we have Ifedayo Adedipe (SAN), and for Akure South/North federal constituency, we have Kemisola Adesanya ditto the assembly candidates”, he stressed.

He said the youths on their part have tried their possible means to settle the crisis without noise making but all their efforts proved abortive.

“We formed a consensus that all of them must be our candidates without any rift. We are saying that all of us have begged our leaders, the state met with them, and the leaders met with them but at the end of the day, we could see that their differences failed to be addressed.

“All our aggrieved leaders must come together, it is in their togetherness that we will benefit, we are standing against internal disorder and external aggression.

“We are telling our leaders that we need a week to settle their differences. We call on Baba Oluwateru, Eyitayo Jegede, and the Chairman of the party in Akure south to kindly meet in the name of peace and resolve this crisis, all we want is peace and anything out of peace, we won’t tolerate it”