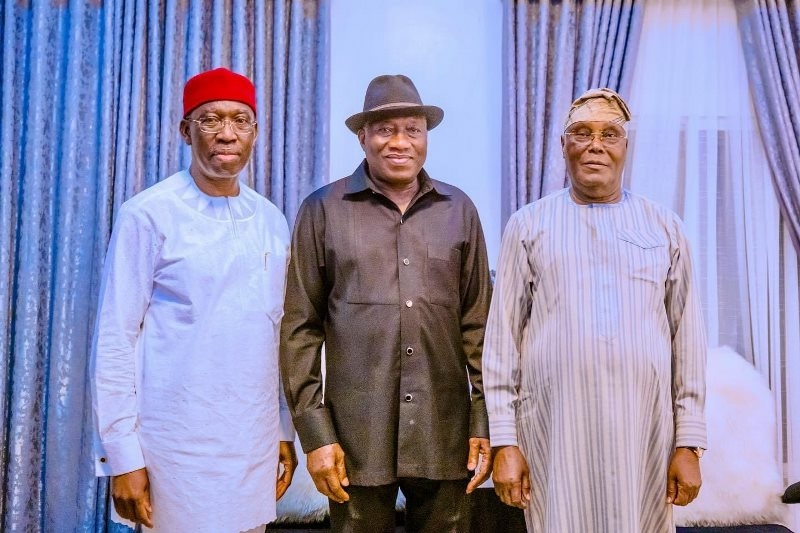 The former president of Nigeria, Goodluck Jonathan has reportedly scorned at overtures from certain persons in the Peoples Democratic Party hierarchy to help reconcile the presidential candidate of the Party, Atiku Abubakar and the G-5 Governors.

There had been reports that the leadership of PDP are seeking the help of Jonathan to address the crisis in the party ahead of the 2023 general election.

The move appears to be futile after the former president reportedly refused to be involved in the crisis.

Recall that Atiku, his running mate, Ifeanyi Okowa and some party leaders a few weeks ago had met with Jonathan at his residence in Abuja.

It’s gathered that they requested the support of Jonathan in the 2023 presidential election.l.

However, a close ally of Jonathan who spoke with Saturday Sun in confidence said the former president is yet to forgive Atiku for working with some governors in 2015 to humiliate him, despite his plea.

The source said even though Wike would heed Jonathan’s word, the former president is not interested in a mediator role as he believes Atiku only comes to him every four years when he is seeking the presidential seat.

According to the source, Atiku in 2019 also snubbed and refused the people Jonathan suggested for Atiku’s campaign organisation in the 2019 presidential election.

The source said the former vice president only visited Jonathan before the primaries in 2019 and snubbed him after securing the party’s presidential ticket.

The source said, “Atiku doesn’t have any regard for Jonathan. He’s one of those who believe strongly that Jonathan didn’t deserve to be president. Even as president, Atiku didn’t respect Jonathan. That has not changed.

“He’s only showing some courtesy now that his election bid is threatened. In 2019, Jonathan supported Atiku against the wish of his supporters who were opposed to such support, including Wike.

“As soon as Atiku secured the ticket, he suddenly started ignoring Jonathan and even refused to accommodate the people, the former president nominated to serve as members of the campaign organisation.

“Since Atiku lost in 2019, he has not deemed it fit to reach out to Jonathan. The former president doesn’t want to be used again. So, he has politely refused to help Atiku. Even Olusegun Obasanjo is unwilling to step in too.”