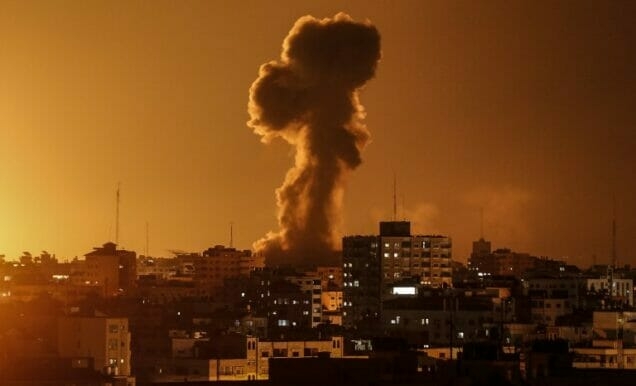 A picture taken on November 12, 2018, shows smoke rising above the building housing the Hamas-run television station al-Aqsa TV in the Gaza Strip during an Israeli air strike. - Israel's military said it was carrying out air strikes "throughout the Gaza Strip" after rocket fire from the Palestinian enclave towards its territory. (Photo by Mahmud Hams / AFP)

The strikes, according to the Israeli Defence Forces (IDF), targeted a weapon manufacturing site “belonging to the Hamas terrorist organisation,” which is “where the majority of the rockets in the Gaza Strip are manufactured.”

According to the statement, a Hamas cross-border tunnel was also targeted.

A rocket fired from Gaza into southern Israel had been launched hours before. There was no Palestinian organisation that claimed responsibility for the shooting, which resulted in no damage or casualties.

The overnight strike was meant to “impede the force build-up of the Hamas terrorist organization,” the IDF said.

Hamas took over control of the Gaza Strip in 2007. Since then, Israel has enforced a strict blockade on the territory and against the organization which is hostile to the country.

Earlier this week, Israeli military forces killed two prominent members of the Palestinian Islamic Jihad (PIJ) in the West Bank city of Jenin, after which the PIJ vowed revenge.