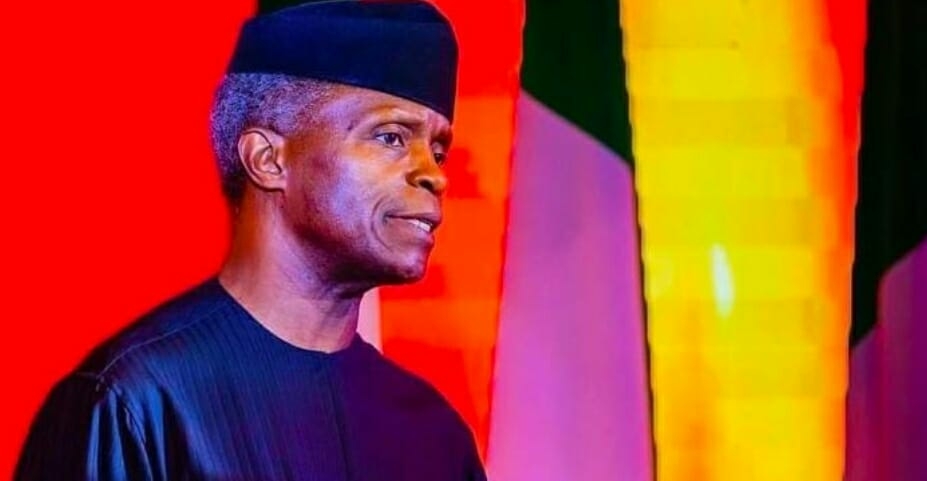 In light of the difficulties the country is currently facing as it gears up for the 2023 elections, Vice President Yemi Osinbajo has urged Nigerians not to feel dread or despair.

He also expressed optimism that Nigeria would overcome its challenges and hold the elections and population count without hostility.

During the 2022 Service of Nine Lessons and Carols held on Sunday night at the National Christian Centre in Abuja, Osinbajo, who was in attendance in the person of Boss Mustapha, Secretary to the Government of the Federation, expressed these opinions.

The vice president delivered a message of hope, urging people to adopt a more optimistic outlook and alter the way they perceive the nation’s current difficulties.

He said, “Your theme of this year’s celebration is ‘Fear Not’. This is a very important subject for everyone of us even as we approach 2023 which has been described as a year that Nigeria seems to be at a crossroad. We are approaching the year 2023. Yes, we are going to have elections and we are going to have a census exercise.

“All these issues come with a lot of questions, but we have an assurance from our Lord and Saviour. He will not let our hearts be troubled. We should believe in Him and believe in God.”

The President of the Christian Association of Nigeria, Archbishop Daniel Okoh, in his sermon titled, ‘Lay Down Your Fears’, said that the citizens feel more terrified than at any other time in the nation’s history because of the high level of insecurity and uncertainties within the country’s political economy.

He however charged the people not to allow fear to cause them to speak the language of despair and division ahead of the 2023 general elections.

Okoh said Nigerians should not lose hope and act in ways that would hinder the development and progress of the country.

The CAN president said, “As Nigerians prepare for the general elections in 2023, many people are not sure of the outcome. There are fears that some may resort to violence if the elections do not favour them. It is a period that arsonists have already destroyed election materials in certain places with the mindset to truncate the process of the elections in 2023.

We are in a precarious time because people who are displaced from their homes due to insecurity are not sure of how to participate in the forth-coming elections.

“These situations are really frightening but how should we respond to these situations in which we find ourselves? Fear could lead to irreparable mistakes. Should we live in fear? No, we should not be afraid even in the face of all these challenges.”

Drawing his scriptural text from Matthew 1:20-21, Okoh explained that the story of Christmas addresses the circumstances in the country, the fears of the people and the future of the nation.

He said, “Let the story of Christmas move us to speak the language of peace to our neighbours regardless of differences in religion, ethnicity or political leanings.

We should not allow fear to stop us from working against injustice. Let the resources and positions in governance be shared equitably among people of all regions and tribes. Equitable distribution of positions should not threaten the existence of any ethnic or religious group, rather it will help us to harness the abundance of potentials in our dear country for national development.

“We should not allow the fear of losing elections to lead us into violence and rigging before, during and after the 2023 elections. Politicians should engage in electioneering campaigns and elections properly with the mindset that after all genuine efforts are made, we should surrender to God for the final decision.

“We should not allow fear to lead us to the temptation of misleading the unsuspecting public with fake and disjointed stories. Religious and political leaders and the media must present the true position of issues to Nigerians to enable them to make informed decisions at the polls for the good of all.

“Fear of the unknown should not be allowed to lead our young people to migrate to other countries in search of greener pastures. We can make our pastures here greener again. It requires commitment and consistency.

“The fear of living in poverty should not lead people to stealing public funds. Fear leads people to amass wealth through illegal means. It is important to point out that those who see corrupt activities going on but do not speak against such activities are afraid of being exposed as accomplices or afraid of their lives. Fear does not bring progress.”

The cleric also advised Nigerians to use the yuletide season as a period of strengthening themselves and others, giving hope to the hopeless and the harassed and remaining the voice of the voiceless.