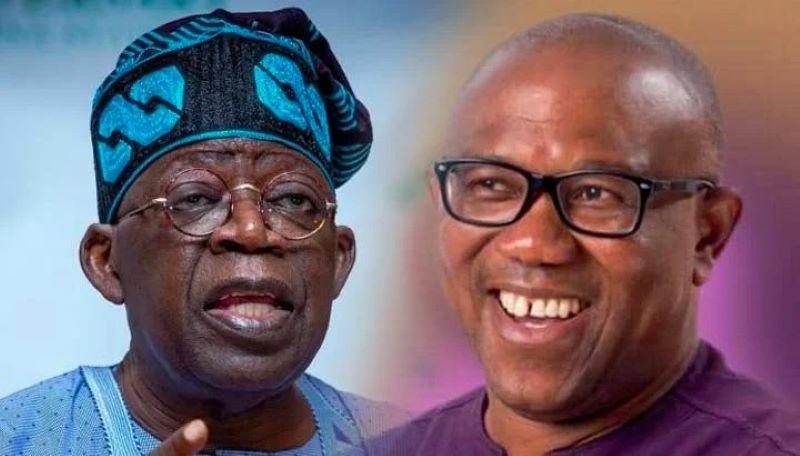 The Presidential candidate of the All Progressives Congress (APC), Bola Tinubu, has dragged his Labour Party (LP) counterpart, Peter Obi, for allegedly replicating the developmental and governance strides of President Muhammadu Bihari in his campaign manifesto.

Describing the 62-page document titled, “It’s Possible: Our Pact with Nigerians”, as “empty and vacuous”, Tinubu noted that Obi ended up promising only “what Buhari has been doing for over 7 years,” indicating that the LP candidate is bereft of governance ideas to offer in terms of security

In a statement issued on Tuesday in Abuja by director, Media and Publicity, if the APC presidential campaign council, Bayo Onanuga, the APC standard bearer noted that Obi’s declaration of Nigeria as a failed state in his manifesto is a fallacy.

Noting that Obi lacks understanding of a failed state, Tinubu said the manifesto is “a poor imitation and regurgitation” of what President Muhammadu Buhari’s administration is doing.

The former Lagos governor identified another fallacy in Obi’s manifesto in the claim that Nigeria recorded modest gains between 1999-2015, during the Peoples Democratic Party (PDP)-led government.

Listing the fallacies in the Manifesto, Onanuga said, “By now, many of the gullible followers must have been utterly disappointed that their man didn’t offer them anything to be proud of after all the blusters and the initial leakage of the document, which contains, strangely, 15 pages of the biographical sketches of Obi and his running mate, Datti Baba-Ahmed.

“Mr. Peter Obi’s document contains no grand policy initiatives and options to excite right-thinking Nigerians. It was silent about how Obi wants to achieve his high falutin objectives. Instead, it will set alarm bells ringing in the South-South and North East as Obi promises to ‘engineer the transition of Nigeria from a fossil fuel dependency to climate and eco-friendly energy use’. As expected, Obi’s document contains fallacies and false statistics.

“One of the fallacies contained in the document, which Obi has often repeated to his followers, is that Nigeria is a failed state. We wonder whether the Labour Party candidate sometimes bothers to check the meaning of a failed state and whether the country he dreams to govern falls into the mould of Yemen or Somalia, where institutions of government have lost total control of their societies.

“Another fallacy is Obi’s claim that Nigeria recorded modest gains between 1999-2015, the PDP years, even when all verifiable evidence points to the contrary.

“The Labour Party candidate simplistically diagnosed Nigeria’s problem as ‘elite capture’, which is self-indicting as he and his running mate, who he styled ‘new breed’ are members.

“He claims incompetent leadership has divided the nation, playing up religious and ethnic sentiments. Another self-indictment as the hallmark of his campaign has been to jump from one church to the other, positioning himself as a ‘Christian candidate’ and inciting the church against the current APC government.

“In fact, the document Mr. Obi released is a poor imitation and regurgitation of what the current APC-led administration of President Muhammadu Buhari is doing. If anything, the document showed him as a man without honour, credibility and character because he is promising to do all the things he has railed against and de-legitimised in the past.

“We make bold to state that Mr. Obi lacks the mental acuity and rigour for the job he is asking Nigerians to entrust to him. He is surely not ready and prepared to be the President this great country deserves.”

Tinubu noted that Obi’s plans to tackle insecurity in Nigeria by partnering with Cameroon, Chad and Niger was exactly what President Buhari did within his first week in office as president in 2015, and has continued to do so by strengthening regional cooperation.

On Obi’s promise to complete the $2.5 billion FG-Siemens Power network upgrade, the APC campaign spokesman stated: “Nigerians should recall Peter Obi told the world that he went to Egypt on a study tour of power where he was told by Siemens that nothing is happening on the power agreement the company signed with Nigerian government.

“Without apologising for his lies and deliberate mischief, Peter Obi is promising in his document to continue with a project he said does not exist. What a travesty!

“In a show of total lack of awareness, Obi also promised to complete Dadinkowa hydropower project as part of his promise to solve electricity problems in Nigeria without knowing that same project has since been completed by the current administration of President Buhari.

“Mr Obi’s policy document, if anything, has only exposed him as ill-prepared for the titanic task of governing a country the size of Nigeria. As a candidate, he has nothing new to offer Nigerians beyond hawking fake statistics and preying on the young people’s sentiments as a demagogue,” he said.