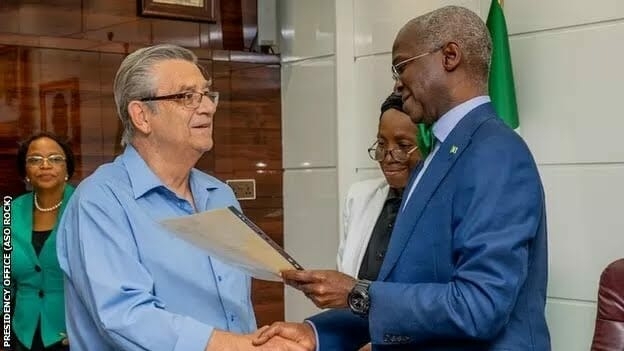 The Federal Government has redeemed its pledge of a house to former Coach of the Super Eagles, Clemens Westerhof, who led the Eagles to win their second African Cup of Nations title in 1994.

Minister of Works and Housing Babatunde Raji Fashola, SAN handed over the key to the House to Mr. Westerhof in Abuja, Wednesday.

Fashola was represented at the hand over ceremony at the Proto-Type Housing Estate, Gwagwalada, Abuja, by the Director, Public Building, Architect Solomon Labafilo.

This was contained in a statement signed by Director (Press & Public Relations) of the Ministry, Blessing Lere-Adams.

She explained that the house allocation was a fulfillment of the promise the Federal Government made to the victorious 1994 Super Eagles Team that won the African Cup of Nation 28 years ago.

According to her, other ex Super Eagles players of the1994 team had also been given their houses at the respective states of their choice.

Fashola, was quoted as saying at the event, “We gather here to commemorate the formal handover of keys to beneficiaries of the promise made by the government to the victorious 1994 Super Eagles Team over 28-years ago.”

He explained that Government’s pledge to the 1994 Super Eagles remained un-redeemed until President Muhammadu Buhari approved that all Members of the Team be handed over their houses.

Mr. Westerhof was most noted for his success with the Nigerian National Team.

Under him, the Super Eagles won the 1994 African Cup of Nations and also qualified for the second round of the FIFA World Cup that year.

Fashola added that,“ Some of the beneficiaries like Westerhof were allocated his house in the Prototype Housing Scheme here in Gwagwalada-Abuja and other beneficiaries were allocated their homes in respective states of their choice in the National Housing Programme estates across the Country.

“This is a testimony of government resolve to ensure that Nigerians irrespective of time, who made sacrifices to project the good image of the Country, are recognized and encouraged to keep working for the corporate benefits of all.”

Accordingly, the Minister listed among other beneficiaries who have collected their keys and title documents to their homes;. They include: Alloy Agu, Uche Okafor, Emmanuel Amunike, Thompson Oliha, Peter Rufai, Efan Ekoku, Isaac Semitoje, Austin Eguavoen, Col. A. Asielu and Stephen Keshi amongst others.

Earlier, the Permanent Secretary of the Ministry, Bashir Nura Alkali said that the handover of keys and title documents to one of the beneficiaries of government pledge is an indication of the resolve and commitment of the Federal Government led by President Muhammadu Buhari to keeping promises made.

The Permanent Secretary who was represented by the Director of Housing, Architect. Uquo Uzodinma said that the Ministry has commenced the implementation of Mr. President’s directive that all 1994 Super Eagle’s Victorious Team Members be given their homes.

She said:, “This the Honourable Minister has followed through by ensuring that all members of the Team are allocated homes. The Ministry did not insist on putting all of them under one-estate and therefore allowed all beneficiaries to pick their homes in any state of their choice,”

In his response, Mrs Clemens Westerhof represented by Mrs. Charity Nankyer Biwet expressed gratitude to Mr. President for fulfilling the housing pledge made to the 1994 Super Eagles Team and the Coach, saying that it was a promise kept.

She conveyed Mr. Westerhof’s appreciation to the President and the Minister of Works and Housing for the honour bestowed on Mr. Westerhof after 28 years of the promise made by past government.

She pointed out that the gesture demonstrated that President Muhammadu Buhari is committed to encouraging hard working Nigerians who are contributing in one way or the other to the upliftment the country.