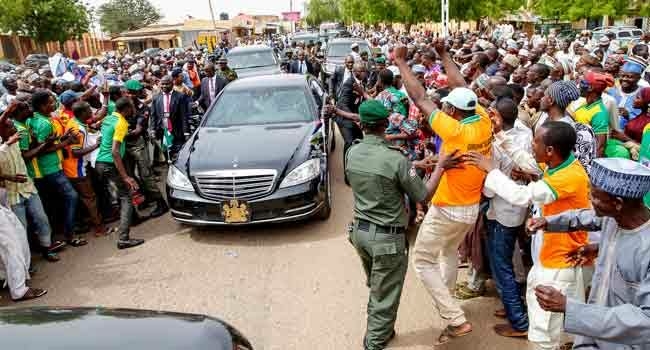 The Commissioner for Local Government and Chieftaincy Affairs, Hon. Ya’u Umar Gwajo-gwajo has debunked the news making the round that the Katsina Governor, Aminu Bello Masari approved the sum of N499.6 million for the mobilisation of citizens to welcome President Muhammadu Buhari to his State to commission some projects executed by the state government.

Gwajo-gwajo, while reacting to the allegation when contacted by some journalists on Tuesday denied knowledge of any such approval or withdrawal from the state government coffers, noting that he has been busy with campaign activities and hardly stays in the office lately.

He said: “To the best of my knowledge, there is no such approval or withdrawal carried out by the state government. Besides, I have been very busy with campaign activities for our candidates and have not been to the office neither did I attend to files for some days now. Those of you that have been joining us for the campaign can attest to that.

“Secondly, nobody has called my attention to say that there’s such a letter or document that needs my attention.”

The alleged approval of the money earmarked for the President’s visit by the Katsina Governor was contained in a leaked letter dated 18 January 2023 trending on social media.

As contained in the letter allegedly signed by Yahuza S. Ibrahim on behalf of the Permanent Secretary, Government House, and addressed to the Commissioner for Local Government and Chieftaincy Affairs, Hon. Ya’u Umar Gwajo-Gwajo, the money is expected to be taken from the local government joint account.

“From the available balance of the 34 LGCs in the Local Government Joint Account to enable the LGCs to cater for adequate and effective mobilization of citizens to receive Mr. President during an official visit to Katsina State from 26th -27th January, 2023.

“Attached herewith is a photocopy of the approval for your guidance. This letter is copied to the Accountant General, Ministry of Finance and Auditor General for Local Government for awareness, please.”

Meanwhile, reactions keeps trailing in on the alleged approval of the said amount earmarked for the mobilisation of citizens to welcome Nigeria’s President to his home state, Katsina between 26-27 January 2023.

The Chairman of the Coalition of Civil Society Organisations (CSOs), Katsina State, said the allegation may not be far from the truth as it is one of the measures through which local governments’ funds are siphoned by the state government.

According to Abdulrahaman, ” It is the highest level of irresponsibility to channel such “stupendous amount” for Buhari’s visit to the state knowing that a lot of children in the state receives education sitting on bare floors, with poor access to healthcare and absence of portable water in many communities as a result of paucity of funds.

“This money, if properly utilised, is enough to pay one year allowances for over 4,000 casual workers in the state, provide 500 communities with potable water or fabricate 50,000 desks for our students to learn in a more conducive atmosphere,” Abdulrahaman said.

Similarly, the state Chairman of Atiku/Lado Integrity Forum, Lawal Audi-Yar’Adua, said the alleged action proves that the Masari-led government is less concerned about the plight of the millions of citizens of the state currently facing one hardship or the other.

According to him, the plan of the government was to use the funds to campaign for the candidates of the All Progressives Congress (APC) ahead of the forthcoming general election.