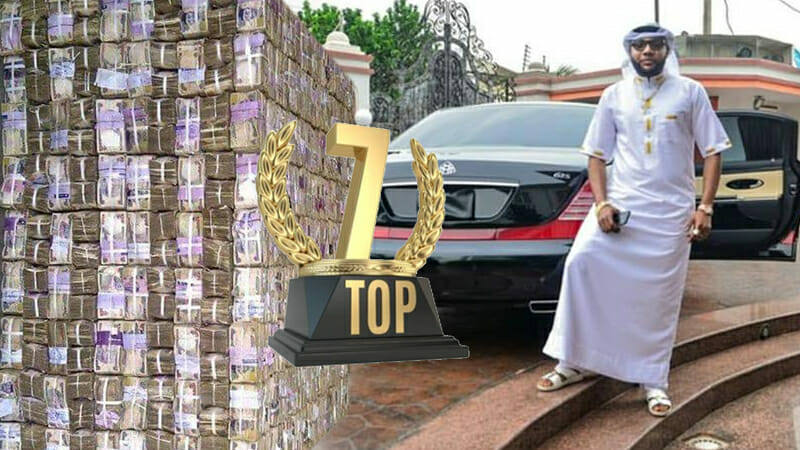 We analyze the top 7 richest Igbo men ( We mean both male and female) who haven’t clocked 50 years of age but are making significant strides in their respective fields.

Born 2nd April 1981, in Umuhu Okabia, in Orsu Local Government Area of Imo state, Pascal Chibuike Okechukwu popularly called Cubana chief priest is the second son of his parents. He was also raised in Umuhu Okabia, Imo state but later joined his father in Aba, Abia state where he learned how to make shoes. He never gave up on his Shoe business; according to him, he made his first 1million naira from shoemaking during his school days in Federal Polytechnic Nekede, Owerri.

He has always dreamt of having a successful music career but he couldn’t achieve that. However, he was undeterred from becoming successful in the entertainment industry and so he began his career in the nightlife sector. He worked many years at Cubana Hotel, Owerri as the General Manager of the Cubana Conglomerate; this was wwhere he met Davido. According to him, Davido turned his life around. On August 19, 2018, Davido visited Owerri with Chioma, his fiancée, to perform. A massive crowd thronged into the Cubana Grand Hotel in Owerri to watch Davido’s performance, thus increasing the popularity of Cubana. That was the game-changer for Chibuike and his career in the industry; since then, his career skyrocketed to new heights. He left Cubana Grand Hotel to found his Club – Club Xhrine in Owerri which has continued to grow.

The nightlife boss officially bagged a Doctor of Science in Event and Luxury Hospitality Management from European American university. Pascal Chibuike announced this feat via his Instagram page on Saturday, April 24, 2021.

The Club Xhrine boss has worked with several A-list music artists in Nigeria, such as Davido, Peruzzi, Burna Boy, and others. Cubana chief priest has worked with various artists and celebrities, including BBN 2019 winner Mercy Eke, who he sponsored at the recently concluded reality TV show.

He was able to achieve these figures as a result of his successful career as an entrepreneur and show promoting also bagging some notable endorsement with brands like bullet drink.

Linda Ifeoma Ikeji was born on September 19th, 1980 in Nkwerre in Imo State. She is a Nigerian blogger, writer, entrepreneur, and former model. She is well known for her blog posts and online publications.

Linda graduated from the University of Lagos, where she studied English Language. To support herself and her family, she worked part-time as a waitress, model, and writer. And after her graduation, she began blogging in 2006. As one of the earliest bloggers in Nigeria, she made a name for herself with interesting and controversial posts which raised her popularity amongst Millenials. Linda Ikeji hasn’t looked back since then and has kept the consistency of building her brand which has earned her accolades and riches.

On 22 August 2016, on her blog, the forty years old announced the creation of her online TV network, Linda Ikeji TV alongside other brands she was establishing. She also ventured into online radio broadcasting. The station is operated from the Linda Ikeji Media Office. Some of its programs are broadcast live on Linda Ikeji TV. Linda also opened a music platform known as LindaIkeji Music which was launched on 21 November 2016, but it became dormant three months after the Launch. She launched a social networking platform named Linda Ikeji Social on the domain name LindaIkejiSocial.com.

Linda runs a non-profit project themed “I’d rather be self-made; No thanks”. In her interview with HipTV, she revealed that through the project, she assists young girls aged 16–25 who have great business ideas and are willing to venture into entrepreneurship. She gave out the sum of NGN10,000,000 in Phase 1 of the project.

In 2018, Linda Ikeji was among the prominent personalities drawn from different parts of the world to be conferred with Honorary Doctorate Degree from Trinity International University in Georgia for her outstanding contributions to Business and Media in Africa. Today one can hardly talk about the 10 most successful women in Africa without mentioning Linda’s name. She is also among the top searched Nigerian personalities on Google.

Founder, Investor, Advisor, and CEO, Jason Chukwuma Njoku has built a great name for himself. He is the co-founder and CEO of iROKOtv, a video-on-demand service for Nigerian movies. Born 11 December 1980 and raised in Deptford, South East London, he had his secondary school education in Nigeria before studying at The University of Manchester, UK. iROKOtv has grown and birthed other businesses including the successful production house, ROK Studios.

Jason is also the Co-founder of SPARK, a $2 million investment vehicle for Lagos-based Internet start-ups called Spark. The company has invested in companies such as Drinks.ng ( a drinks distribution company), ToLet.com.ng (a real-estate and property online letting agency), Hotels.ng (a hotel room booking site), etc. SPARK approach to investment is not the archetypal approach used by Venture Capitalist; they provide legal, marketing, technical and administrative assistance to their funded companies.

Jason has always tried his hands in many businesses, before his success with iROKOtv. Interestingly, iROKOtv is Njoku’s 11th attempt at starting a business, an idea he birthed whilst living at home with his mum, aged 30, after several failed enterprises. He is also currently the Executive Chairman of Blackbet and Betty Bingo

In July 2012, he was cited by Forbes Africa as one of the ‘Ten Young African Millionaires to Watch’.On 29 August 2013, Njoku was named the CNBC All Africa Business Awards Young Leader of the Year for West Africa. He has also been named as one of Fast Company’s Top 1000 Most Creative People in Business.

He is currently married to Nollywood film star and producer Mary Remmy Njoku and is blessed with three kids.

Kennedy Okonkwo is a Nigerian businessman, philanthropist, and real-estate entrepreneur. He is the founder and CEO of Nedcomoaks Limited.

In 2018, Forbes Africa featured him on the real estate supplement of its November Cover edition with the tag – Dr. Kennedy Okonkwo, the innovative real estate entrepreneur. The Forbes Cover shows Dr. Ken’s reflection on the power of collaboration in the housing sector on the continent.

Dr. Kennedy Okonkwo is the Founder and CEO of Nedcomoaks Limited, a real estate company engaged in the acquisition, development, and management of properties in Nigeria. Nedcomoaks has quickly become a top player in Nigeria’s residential real estate sector which employs thousands of people and annual revenues of over ₦15 billion in just under a decade.

He is additionally known for his perfect desire for fashion brands like Louis Vuitton, Dolce and Gabanna, Gucci, Zara, and others.

Emeka Okonkwo popularly known as E-Money is a billionaire, entrepreneur, and philanthropist who hails from Ajegunle, Lagos, Nigeria, on February 18, 1981. E-money didn’t grow up with a silver spoon, he hustled all through to make ends meet. Things were so hard to the extent that he had to borrow transport fare from his brother to bring his wife back to Lagos, after their traditional wedding in the East. The narrative of his life, however, changed on his way back to Lagos, after he got a call to execute a contract worth $2 million.

E-money spraying money at a wedding:

He is the younger brother of the Limpopo crooner, Kcee, and also the official sponsor of his music career plus that once had Harrysong and Skiibii. He is also the head of a shipping company called Emmy Cargoes Nig. The company was established in 1997 and was formerly called Borisa Nig. Ltd. E-money is the owner of the Five Star Group. The company produces made in Nigeria tomato paste, sweet corn, coconut milk, and mackerel in tomato sauce. They are also involved in the oil and gas business.

Obinna Iyiegbu, popularly called Obi Cubana is a well-known Nigerian entrepreneur, CEO of the Cubana Group, and a show promoter. He refers to himself as God’s preferred son. He was born on 12th April 1975, he is a native of Anambra State.

He is chairman of Cubana Group – a conglomerate made up of companies in Nightlife, Entertainment, Real Estate, etc. Cubana, Owerri, and others. He is currently working on Cubana Dubai and Cubana Real Estate. Obi Iyiegbu’s estate, including his various cars and businesses, are all worth millions in dollars. He is a person who can buy any luxury he desires, thanks to his success with the Cubana Group, a well-organized professional entertainment company.

The socialite has won several awards and recognition across the country including the “Democracy Heroes Award” 2018 as “Democracy Entrepreneur” of the year, “Ghana-Nigeria Achievers Award” as “Inspiring Personality Award, 2017, and several others. The nightlife boss owns several mansions across the country with a couple of exotic cars from Mercedes Benz 4matic S40, 2 Lexus LX, Bentley, and others. Obi Cubana’s net worth is estimated at $500 Million.

Unconfirmed reports have it that E-money and Jowi Zaza are the lead investors of Cubana Group of companies.