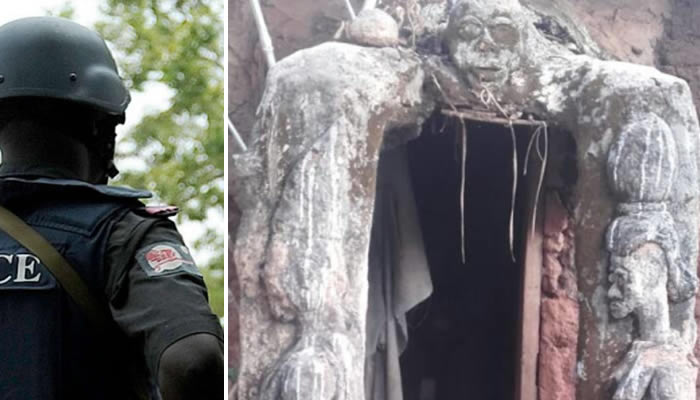 Residents of Ilobu town in Osun State expressed shocked as men from the Osun State Police Command stormed the town and uncovered ritualists’ den with some shallow graves.

The Ritualist den, located inside a big house at the Molete area of the town, was on Friday uncovered by a team of policemen led by the state Commissioner of Police, Mr. Fimihan Adeoye.

Adeoye told journalists that the police acted on a tip-off and swooped on the den where two persons, believed to be siblings, were arrested.

He said the leader of the syndicate was at large but the police would not give up until he and other accomplices were arrested.

He said, “We acted on a reliable tip-off which led to the arrest of two brothers of the same parents while their kingpin and leader is still at large. Of particular interest is the discovery of a dungeon with path which connects one of the shrines to another. Several statues and hundreds of bottles of alcohol were scattered around the shrine.

“Some shallow graves were also seen around the building but we are still investigating to be sure if they are graves of victims of the fraudsters.”

The CP appealed to the people of the state to always assist the police by giving them useful information which could help them to perform their duties better.

He said security of any state or nation could not be left in the hands of a few security men, adding that everybody should be involved.