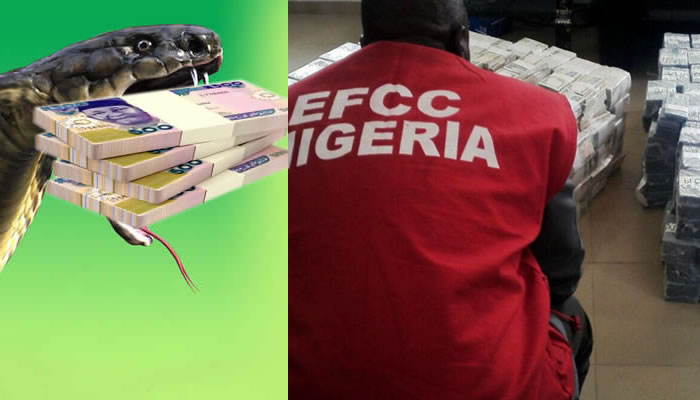 Philomina Chieshe, who works as a clerk at the JAMB office in Markurdi, Benue state, initially told top officials of the examination body that a “mysterious snake” swallowed the money gotten from the sale of JAMB scratch cards.

However, when she appeared before the Economic and Financial Crimes Commission (EFCC), she confessed that the money was collected by one Samuel Umoru,  her superior.

The Economic and Financial Crimes Commission has smashed a syndicate that specialises in diverting funds from the account of the Joint Admissions and Matriculation Board. The EFCC also grilled a JAMB official based in Makurdi, Philomina Chieshe, who claimed that a snake swallowed N36m which was part of the proceeds of the sale of scratch cards.

Detectives at the commission said Chieshe revealed that the money was collected in instalments from her by her Coordinator, Samuel Umoru. In one of the statements she volunteered to the EFCC, Chieshe who is a clerk in the Makurdi office of JAMB, was said to have revealed that the coordinator usually asked her to withdraw proceeds of the sale of the cards from her account in two banks.

It was learnt that before the advent of the Treasury Single Accounts, the practice at the time was for JAMB officials to keep the proceeds of the sale of cards in unauthorised bank accounts which led to the loss of billions of naira. In the statement she made to the EFCC under oath, Chieshe said, “This money that I withdraw, the coordinator used it for the office and some time for himself.”

She claimed that she had been warning Umaru that it was improper to use the money for miscellaneous expenses in the office or for private purposes but he would not listen. The suspect also claimed that Umoru was in the habit of drawing IOUs from the proceeds of the sale of the cards without reimbursing her.

Chieshe added, “He instructed me to withdraw the sum of N640,000 using my card between June 30, 2014 and July 7, 2014.” Sources close to the EFCC disclosed that the investigating team had verified the withdrawals after a careful analysis of the statements of account of the suspect. It was learnt that Umaru had also been arrested and questioned about claims by Chieshe.

He was, however, released on administrative bail. An EFCC source said, “The interesting aspect of the disclosure is that Chieshe’s statement was obtained long before the snake and naira swallowing testimony became public knowledge. “She was first quizzed on February 16, 2017 and made additional statements on April 7, 2017 , May 30, 2017 and June 28, 2017. “In all her statements before the EFCC, there was no mention of any episode of any snake and the disappearance of monies in her care.”

The EFCC also quizzed another JAMB official, Tanko Labaran, the clerk in Nasarawa State office of the board who could not account for scratch cards worth N23m. He allegedly claimed the cards given to him were lost in a car accident. According to Labaran, he had an accident on his way from the head office with cards and the vehicle caught fire. The suspect also had a police report to back the claim.

But a source at the EFCC said investigation so far indicated that the cards which were supposedly destroyed in the accident were used judging by evidence secured from the JAMB information database. “The serial numbers of the cards and the telephone numbers of the users were captured by the JAMB information system,” the source said. Meanwhile, the EFCC has also quizzed another officer from the Gombe State office of JAMB for failure to account for N20m worth of cards. During interrogation, he claimed not to have received any cards, that his signature on the letter transferring the cards to him was forged.