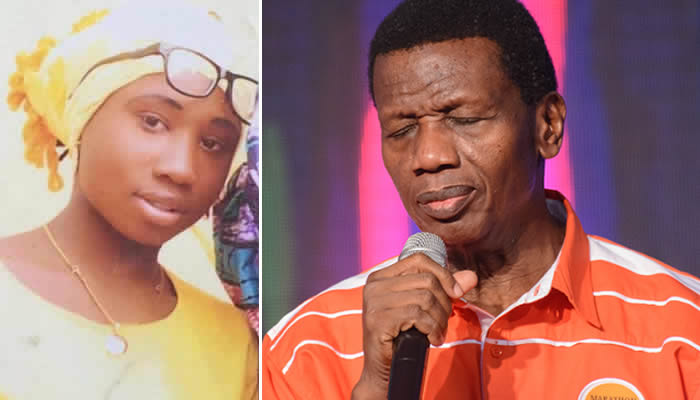 The terror sect refused to release Leah, a Christian, with other abductees on Wednesday because she would not renounce Jesus Christ and her religion.

Adeboye, in a tweet on his official handle, prayed that the Lord should ”visit the camp of the captors and “in a way that You alone can, see to the safe release and return of the missing girl, Leah Sharibu, in Jesus name.”

In another tweet, he said: “Isaiah 49:25: But thus saith the LORD, Even the captives of the mighty shall be taken away, and the prey of the terrible shall be delivered: for I will contend with him that contendeth with thee, and I will save thy children.”

Port Hacourt-based church vows to use its offering and tithes to send withheld Dapchi school girl, Leah Sharibu, to school + build a three bedroom house for her parents

A Port Harcourt based church, Omega Power Ministries, has offered scholarship to Leah Sharibu, the Dapchi school girl who is still in Boko Haram captivity after she refused to denounce her faith as a Christian.

The church says it will use its offering and tithes to buy land and build a house for her parents if they chose to relocate to Port Harcourt. See the chuch’s post below…

Mrs Rebecca Sharibu, the mother of the Christian Dapchi Girl, has appealed to the Federal government to do everything it can to ensure the fast release of her daughter, Leah Sharibu, from Boko Haram captivity.

The sect members held on to Leah after she refused to denounce her Christian faith.

In an interview with the Nation, Leah’s mother said her daughter sent a message to her that her family should pray for the will of God to be done in her life. Mrs Sharibu went into coma after her daughter and the remaining 109 girls were kidnapped by the sect members on February 19th. She has however regained conciousness but is still in a very sober mood.

“The released girls told us that the insurgents insist that my daughter must denounce her religion. But she told them she has no single knowledge of Islam and can’t be. She was then left out of the Dapchi trip on the condition that any day she accepts Islam she will be released. Leah, we were told was left with three other Boko Haram women there and she sends message that we should pray for the Will of Gods to  be done in her life”the distraught mother said

She appealed to the Federal government to ensure her daughter is released soon.

“So I plead that Government and the negotiation team should revisit the terms of the agreement to enhance the release of my daughter. Everybody has his religion and no one should be compelled to practice a religion he or she never wishes to”.

On his part, the Catholic Bishop of Oyo, Bishop Emmanuel Badejo, appealed to President Muhammadu Buhari to facilitate Leah’s release.

”The biggest litmus test for President Buhari and the APC government in this Dapchi girls saga is the case of Leah Sharibu, the only kidnapped Dapchi girl yet to be released by Boko Haram,” Badejo told reporters.

”Leah, on the evidence of her colleagues, was not freed because she refused to renounce her Christian faith.

“Anyone who thinks this is just a Christian problem will be making a big mistake,” he said.

“No amount of accolades will suffice to congratulate the girl and her parents who nurtured her to be that strong in her faith as to demonstrate such courage.”