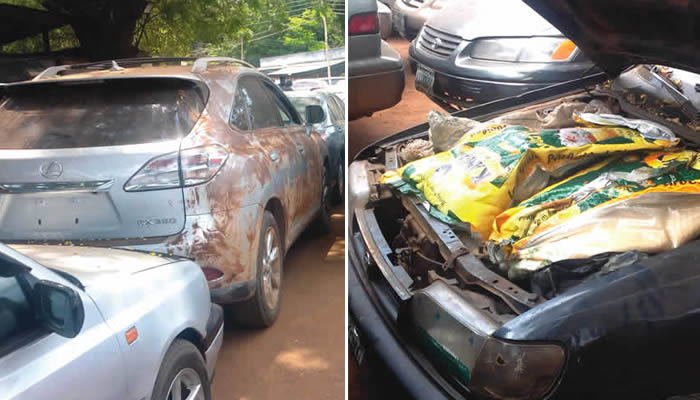 The Ogun State Area Command, Nigeria Customs Service, says it has intercepted 20 smuggled used vehicles, popularly known as tokunbo, and 1,060 bags of foreign rice among other items, around the Idiroko border axis in two weeks.

The state controller, Sani Madugu, disclosed this to journalists on Friday at the Idiroko border office of the command, stating that two suspects were also arrested.He listed other seizures made within the period to incl

He said 18 cars and 19 motorcycles used as means of conveying the smuggled goods were also impounded.

Madugu, who said two suspected smugglers were arrested, explained that the duty payable value for all the seizures was over N169m (N169,767,475.00).

Madugu said 10 out of the second-hand vehicles were seized in one day inside one compound where the smugglers hid them. He noted that Customs operatives broke the padlock used to lock the gate leading into the premises and removed the vehicles.

He said, “I want to warn again that we have intensified our surveillance and intelligence gathering. This has led to the haul of seizures the command had made in the last two weeks.

“The command intercepted 38 smuggled vehicles within the period under review. The breakdown showed that 20 of the vehicles were ‘tokunbo’ vehicles and 18 were means of conveyance.

“Two suspects were also arrested and they would soon be charged to court.”

Madugu said strategic plans had been made to ensure that punitive measures would no longer be limited to seizure of smuggled goods, but efforts would be geared towards apprehending and prosecution of smugglers to serve as deterrent to others.