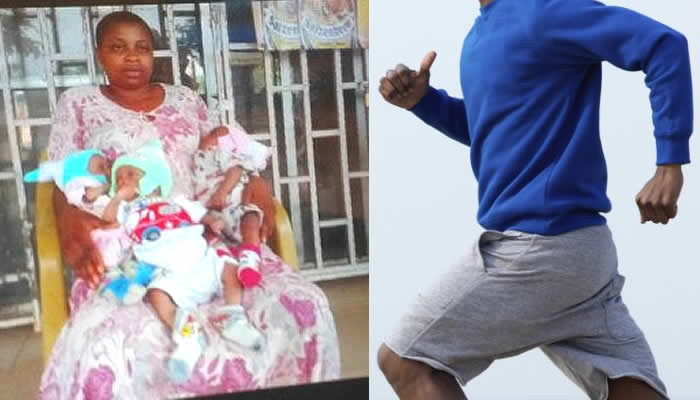 Narrating her plight to newsmen in Benin-City, Mrs. Edobor, said she had been married to Paul Edobor, for 12 years and after he learnt that she was delivered of triplets, all girls, he refused to show up at home let alone pick her calls.

“My husband ran away because he cannot take care of the babies. My husband was aware that I was going to the hospital for antenatal but I put to bed at home. He left me when I was in my labour.

After I have put to bed, I put a call to him but he refused to pick my calls”, she said.
She said since her husband absconded, she and her babies had been living at the mercies of good spirited Nigerians.

“All this time while he was away, people have been the ones helping me to the extent of buying me baby things. I have been going to the market places and churches with the babies to beg for alms. Wherever I go, people thanked God for giving me these babies”, she said.

Mrs. Edobor called on the state government and other well meaning Nigerians to come to her aid to enable her take care of her babies.

“I want the government and good spirited individuals to come to my assistance to enable me take care of my babies”, she said.

She further pleaded for her husband to come back home, adding that she has forgiven him.

“I want my husband to come back to me. I have forgiven him. We have married in the traditional way therefore, there is no going back.

“We both met in Lagos and we decided to relocate to Uromi. We have been married for 12 years now and we have five children altogether now,” she said.