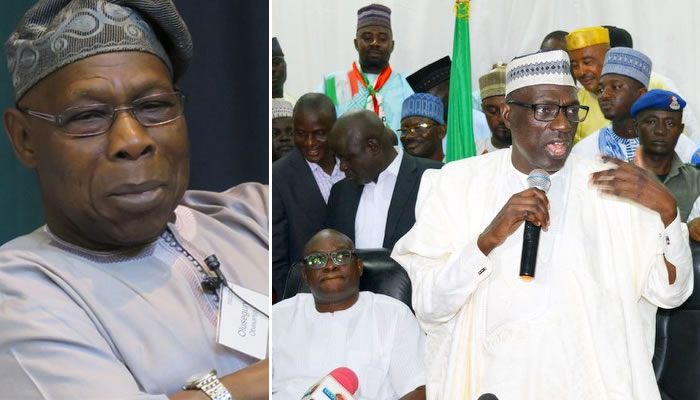 Apparently the main opposition party is disturbed by the decision of the Obasanjo-led coalition to collapse into the African Democratic Congress (ADC) against expectations of finding accommodation in the PDP.

One of the arrowheads of the Obasanjo coalition, Olagunsoye Oyinlola had on Thursday announced the collapse of the group into the ADC for the purpose of unseating the Muhammadu Buhari- led All Progressives Congress (APC) administration in the 2019 elections.

A statement issued on Friday by the National Publicity Secretary of the PDP, kola Ologbondiyan, assured Obasanjo that the concerns raised by him in respect of the PDP had been extensively addressed in the “refocused and repositioned PDP.”

Obasanjo had described the APC and PDP as failures that must not be voted in the 2019 general elections.

The statement said: “Already, our reforms and rebranding efforts, particularly, the full entrenchment of internal democracy, all-inclusiveness and re-engineered mechanisms for good governance, have returned the party to the much desired political platform that represents the wishes and aspirations of Nigerians ahead of the 2019 general election.

“In the last five months, since the coming of the new leadership, under Prince Uche Secondus, the PDP had undergone extensive re-engineering in direct responses to suggestions, criticisms and wide-range of constructive counsels from Nigerians across board.

“The transparent processes, leading to the peaceful conduct of an open, credible, free and fair governorship primary in Ekiti State, at a time when other political parties are enmeshed in impunity-induced crisis and violence, is a loud testimony of the democratic credentials and principles of the repositioned PDP.

“Furthermore, the reconciliatory efforts of the Governor Seriake Dickson’s committee as well as the rebuilding of the party, through the Contact and Integration Committee, are yielding tremendous dividends as manifested in the mammoth crowd that graced our rallies in Jigawa, Katsina and Osun States.

“Our party remains the only political platform with genuine followership and structure in all the electoral wards across the local government areas, states and the six geo-political zones in the country. It is also instructive to add that majority of Nigerians still identify with the PDP as the vehicle for national cohesion, unity, economic prosperity and personal freedom of our citizens.

“Furthermore, our initiative towards the nation’s economic recovery has commenced with the development of a robust and all-inclusive blueprint that will reopen the currently locked-down economic space, redirect the productive energies of our citizens through deliberate wealth creation policies and opportunities in all sectors.”