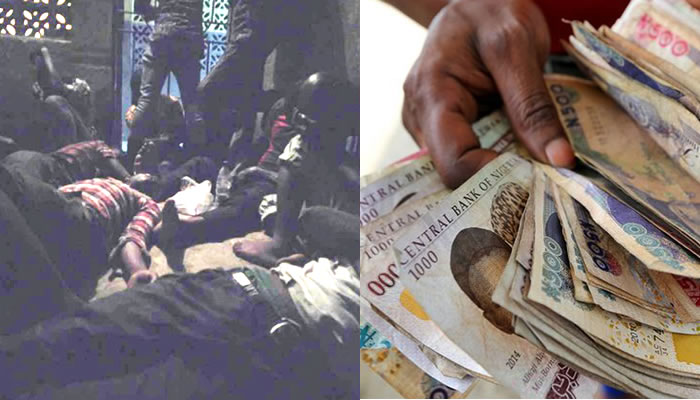 An interior designer, Dapo Oguntimehin, has lamented the alleged harassment and torture meted out to him by some policemen attached to the Amukoko Police Division, Lagos State.

Oguntimehin said he was returning home from work around 10.30pm on Friday when he was cornered at a bus stop by the policemen, who dragged him into their operational vehicle.

The victim claimed that he was locked up in a cell after getting “serous beating,” adding that he was released after N3,500 was paid for his bail.

The 33-year-old told newsmen that he was shocked when the policemen could not produce a bag he brought to the station, which he claimed contained Automated Teller Machine cards, business cards, cardigan and N35,000.

He said, “It all started around 10.30pm while I was waiting at Alafia bus stop on the Lagos-Badagry Expressway to catch a tricycle that will take me home.

“I had not spent up to three minutes at the bus stop when a man pulled me by the waistband and asked me to follow him. Another man came behind me and joined the first guy. I was still arguing with them when the third person came and slapped me. He wore a T-shirt with ‘Police’ inscribed on it.

“I was beaten up until I entered their bus, where there were other people that they had illegally arrested. They took us to the Pako Police Station in Amukoko. They left us and went out to pick two more batches of people.”

He said policemen at the station ordered him and others to line up and remove their personal effects.

The Odigbo, Ondo State indigene said the operatives wrote their names and collected their phones, which were tagged.

“I had two phones. I dropped one and hid the other in my socks. They took my bag. Those who had money on them paid and were allowed to go. Some others called their relatives and some powerful people they knew, and were released as well.

“Those of us left were asked to remove our shirts; but I refused. I was flogged with sticks, slapped on the face and hit with objects on the head.

“I had money in my bag, but I did not tell them. There were a lot of us in the cell. We urinated there because there is no toilet. Everywhere stank. We all slept inside the cell,” he added.

The victim said while the men were kept in the cell, the women were left at the counter.

He noted that one of the arrested females was released after she got a call that her mother was dead.

“We learnt that she was going to pick up her mother, who was ill, before she was arrested. She got a call in the morning that her mother was dead; the policemen allowed her to go.

“When I asked for my bag, they said they could not find it. The bag contained two ATM cards, my business cards, cardigan, belt and N35,000,” he said.

Oguntimehin said when he insisted on getting his property before leaving the station, he was threatened with further torture.

He said he later contacted the Public Complaint Rapid Response Unit, adding that the unit said it had started work on the case.

“The N35,000 was for a job somebody gave me. The policemen did not give me a chance to explain anything before the arrest. I had my ID card, but they were not interested. I am ready to identify them,” he added.

The Head of the PCRRU, Abayomi Sogunle, confirmed that the agency received the report.

He explained that the case had been referred to the Inspector-General of Police X-Squad for “detailed investigation.”

He said, “We are investigating the allegations with a view to finding out the veracity of the claims. However, the social media is not a platform for complaining against police actions. Information there is usually scanty. There are police sections such as the provost’s office, PPRO’s office and even the PCRRU. I encourage people to feel free to approach any of these units and their complaints will be addressed.”