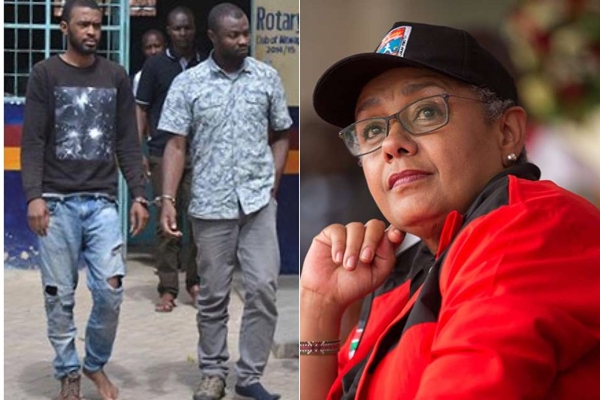 Detectives in Kilifi are holding two Nigerians suspected of impersonating some of Kenya’s top leaders in bid to swindle Kenyans.
Police claim many Kenyans have fallen prey to the suspected fraudsters, Timothy Ogba Ebakole and Alex Olusegun Adebayo.

“We believe that they have received millions of shillings from the public. We took them to court on Friday but asked for another seven days to have them so that we can continue with the investigations,” Chesoli said.

Dismissed policeman reveals why he won’t desist from…

Addressing the press at Mtwapa Police Station where the two are being held, Mr Madzayo claimed the two created a fake Facebook account using his profile and started soliciting money from unsuspecting Kilifi residents

He claimed the two Nigerians even faked his voice, allegedly asking for money to process bursary forms and other funds from the government.

“Even as we speak now, there are people calling and asking why I have not given them bursaries even after giving out money between Sh10, 000 and Sh20,000,” he said.

“On the said Facebook account, they had posted on the timeline, saying that my office in partnership with the national government is giving out loans in the name of Kenya Government 2017/2018 Empowerment Loan for Entrepreneurship (Nationwide). This is not true because my office does not have such an engagement,” Mr Madzayo said.

Mr Madzayo claimed the two would even send loan application forms to their victims to fill, respond in the affirmative, then send the forms back to the victims to sign after which they would then ask for money to process the application.

“People have paid hundreds of thousands in Kilifi to get loans which are not there. For the last six months, I had been receiving calls from people in my county who blame me for taking money and then failing to disburse their cash. That is when I decided to report the matter to the police in Mtwapa,” said Mr Madzayo.