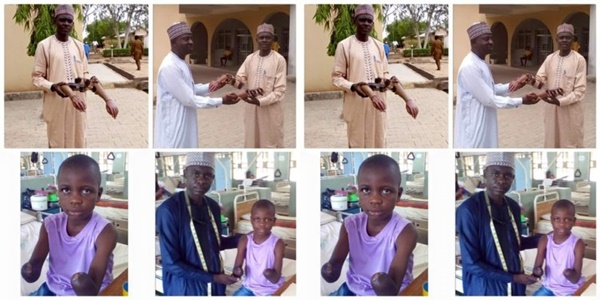 Young Zubairu who lost his arm after being brutalized by his teacher in Gombe now has a reason to smile again as a compassionate Nigerian has procured for him a new artificial arm.

Zubairu lost both of his hands after he was beaten by his teacher in the Kagarawal area of Gombe State.

Mr Abubakar Narkuta from Jos, who felt for the boy then decided to make the artificial hands for him after he had undergone a successful arms amputation.

Zubairu was wounded in March earlier this year after he was brutalised by an Islamic scholar, one Sirajo, who flogged his hands with a sharp object for allegedly stealing.

Following the abuse, the victim’s wounds only worsened, causing both of his hands, just above his wrist, to rot.

Nigerian couple bags 19 years in jail for sexually and physically…

Police arrest man for impregnating his teenage daughter in Ogun

He was left without any medical attention until well meaning Nigerians took up the matter and notified the appropriate authorities.

Zubairu’s hands had to be amputated at the Federal Medical Centre, Gombe.

The teacher that was involved in the brutal act was later convicted, after the intervention of the state governor Ibrahim Dankwambo, who promised to settle all the medical bills of the victim.