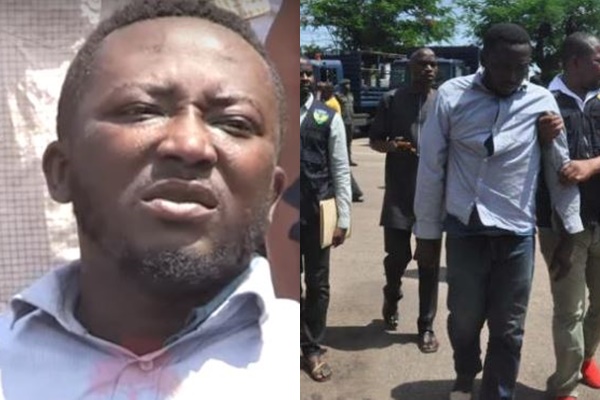 The Untold Story Of AY, The Offa Robbery Gang Leader

With the arrest and parade of the suspected kingpins of the Offa bank robbery, facts have continued to emerge about the expensive and ostentatious lifestyles of some of the arrested gang leaders, particularly Ayoade Akinnibosun, popularly known as AY.

A correspondent, who visited Oro (base of most of the arrested suspects), in the Irepodun Local Government Area of Kwara State, found that the suspected gang leader lived big, amidst neighbours, who confirmed his ruthless nature.

Oro is one of the biggest towns in the Southern part of Kwara State, known for its rich culture and enterprising indigenes, who are predominantly businessmen and farmers.

The town is a city in the heart of Igbomina, Kwara State, hosting numerous landmark establishments, prominent among which is the College of Education, Oro.

Many of the impeccable sources, who spoke in separate interviews with a correspondent on his two-day visit to the town, preferred anonymity, owing to the sensitivity of the issue, and the fact that some notorious criminals, who had once been convicted, had, in the past, allegedly found their ways back into the community to terrorise those who testified against them.

A middle-aged civil servant, who was a coursemate of two of the arrested suspects – Ayoade Akinnibosun and Ibikunle Ogunleye, popularly known as Arrow – at the Ekiti State University, Oro campus, where they all studied Guidance and Counseling.

The civil servant, who was still shocked to learn of AY’s lead involvement in the Offa robbery incident, said, though he knew him as a political thug, it was a surprise to learn that he was a notorious armed robber.

“Ayo is a very respectful and easy going guy. He was one of the most popular guys on and off campus; he lived large in Oro and the entire Kwara South and he is a lavish spender. I know him to be a political thug; it is, however, a surprise to hear that he is a notorious armed robber. I’m still finding it hard to believe,” he said.

Another former coursemate of the gang leader, who simply identified herself as Tinu, said, “I met AY during our NCE undergraduate days in 2003, a few weeks after gaining admission. He used to be a gentle and easygoing chap, until he was alleged to have joined a cult group and he transformed to a terror overnight.

“The fear of AY, back then, was the beginning of wisdom. Nobody prayed to get into his bad books, not even lecturers or the school security authorities. AY was lord on campus.”

A registry staff at the College of Education, who also spoke on the condition of anonymity, went further to give details of AY’s enrolment in the school.

She said, “According to the records available at the school, Ayo Akinnibosun was born on December 23, 1980, in India town, Ondo State. He gained admission into the College of Education, Oro, in 2003, and graduated in 2006 with a Nigeria Certificate in Education (NCE).

“He thereafter re-enrolled thorough direct entry, for a Bachelor’s degree in Education at the Ekiti State University, College of Education, Oro Distant Learning Centre, where he graduated with a B.Ed in Guidance and Counseling with a Second Class lower grade, in 2009.”

Findings by a correspondent revealed that the notorious gang leader, whose confessions are the subjects of heated debates across the country, currently, usually relaxed more in hotels than at home, prominent of which are Topmost Hotel and Dignity Hotel, both in Oro; and Image Garden Hotel, in Esie town, a five-minute drive from Oro.

A man in his early forties, who claimed to be a former neighbour of AY, said, “AY was a resident in the luxurious Government Residential Area of Oro. He is married to a wife based in Osogbo, who he visits at intervals.

He was using a Honda Accord car (baby boy) before changing to a Mercedes-Benz Compressor, which he was using before he got his new Lexus jeep, a few months back.

“He usually takes alcohol, tramadol, and he is a heavy smoker. He is, however, very respectful, humane and usually easygoing until you cross his path; then you’ll see the beast in him. He owns a unisex salon and also a big fish farm, both in Osogbo, Osun State.”

‘HE HANDED HIMSELF OVER TO POLICE’

However, narrating how AY was captured, a police source confirmed to a correspondent that he actually handed himself over to the Police at ‘A’ Division, in Ilorin.

He said, “After the arrest of Arrow, who is a very close associate of AY, and having realised we were closing in on him, he handed himself over to the Police.

“He was driven to ‘A’ Division, Ilorin, by a former Special Adviser on Agriculture to the Kwara State Government, (names withheld), and he was thereafter transfered to Abuja.”

‘WHY HE REJECTED A FEDERAL FIRE SERVICE JOB OFFER’

A source in the community, who was in the same All Progressives Congress caucus as AY, said, in 2016, AY was offered appointment in the Federal Fire Service through the facilitation of a member representing Irepodun Local Government Area at the Kwara State House of Assembly, but he rejected the offer.

“He rejected the offer on the excuse that the job was below his standard,” the source said.

Residents of the Oro community also spoke on how they had abandoned the banks in the area, owing to the indellible fear created by the harrowing past robbery incidents in the area.

A former banker, who worked in one of the affected banks, told our correspondent that some of his former customers now preferred to go as far as Ilorin, if they had to be physically in the bank for transactions.

On January 23, 2013, the town was virtually brought to its knees, when, for close to four hours, daredevil armed robbers held the ancient town hostage, while robbing First Bank of Nigeria Plc and Union Bank of Nigeria Plc’s branches in the town. Both banks have remained shut ever since.

Therefore, in the wake of the Offa robbery incident and the arrest of more than five suspects, residents have cried out to the Federal Government not to leave any stone unturned in ensuring that perpetrators are brought to book and do not find their ways back to the communities to continue the reign of terror.

While confessing, Akinnibosun had said, “I’m the Chairman of Liberation Youth Movement (Kwara South). We are the Senate President’s boys. We work for him at Kwara South. We are the ones that hold Kwara South for him. We have three senatorial districts in Kwara State; there are some people in Kwara North and Central but we control the South.”

However, on whether Saraki was aware of the robbery before they embarked on it, he stated, “They did not send us for the robbery but because we are their political thugs, that was why we did what we did.”

But the Director of Publicity at Saraki’s Constituency Office (mandate), Alhaji Abdullah Oganija, has described the attempt to link the Senate President with the suspected robbers as a continuation of the script aimed at getting him out of office by all means.

He said, “The suspects have never had a-one-on-one encounter with Dr. Bukola Saraki; it is normal for criminals to drop names, it is also normal for them to join the crowd of hailers when a big personality is in town. That doesn’t, however, mean they work for him. As a public figure, criminals can drop your name to gain cheap sympathy and escape
judgement.

“Nothing links the Senate President to the robbery. We cannot hold the Senate President responsible for an act he was never aware of. The fact that they are political thugs, which is also debatable, doesn’t mean they’ll be linked to whichever public figure they claim to follow and support and that personality will be liable for a crime they might have commited without his consent.

“The police only want to technically implicate Bukola Saraki. He never gave them any car. The issue of the Saraki sticker is commonsensical; with as little as N200, I can print a sticker carrying anybody’s name. Does it now mean I work for that person? Will he be held liable if I commit a crime with that sticker? They’re only looking for all means to nail Dr. Bukola Saraki. All these things can never disparage his personality or distract him from helping to deepen democracy.”

Recall that nine police officers and 24 others had lost their lives when a group of about 30 armed robbers attacked Union Bank, Eco Bank, Guaranty Trust Bank, First Bank, Zenith Bank, Ibolo Micro Finance Bank, as well as the Owode Police Station in Offa on April 5, 2018.

Co-founder of Reddit, Alexis Ohanian resigns, says its a way to protest against racial injustice

The head of many African youth is “empty”, BBA’s Tayo Faniran rants