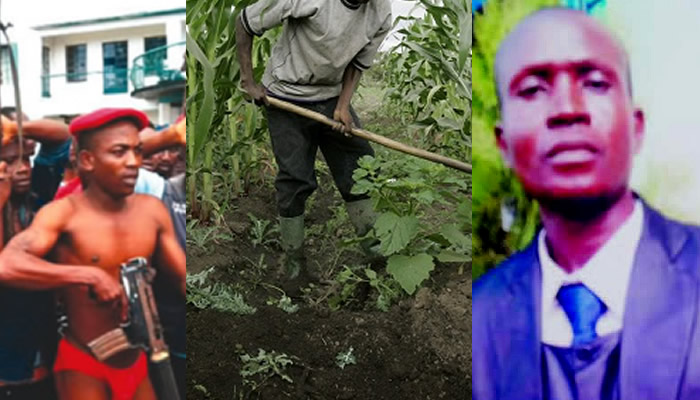 The Umuhuo, Ikwerrede-Awara community, in the Ohaji/Egbema Local Government Area of Imo State was thrown into mourning on Monday after the lifeless body of a pastor, Friday Isinwa, of Seven Days Church of God was found near a pipeline after a two-day search by villagers.

Members of the community revealed that the late Isinwa, a father of four, who was equally a farmer, had gone to one of his farms to harvest cassava when he was waylaid by suspected cult members, who murdered him after striping him naked.

After his remains were found on Monday, a large number of youths and some aged women in the community reportedly staged a protest against the killing.

Our correspondent gathered that there had been a supremacy battle in the community between members of the Iceland and Deygbam confraternities.

While many lives had been lost to the clashes, properties were reportedly set ablaze.

An indigene of the community, who identified himself simply as Kingsley, said, “Pastor Isinwa went to one of his farmlands on Saturday to harvest cassava and did not come back.”

He added that his family members alerted other villagers that he was missing and a search party was organised on Saturday and Sunday.

Man left heartbroken after pastor impregnated his wife of 7 years

The party was said to have found his lifeless body near a pipeline in the community on Monday.

“He was a pastor with Seven Days Church of God in this community. He had four children and was an easy-going man.

“The way we found him showed that his death was terrible; he was stripped naked and made to suffer before he died.

“The community is protesting and we want the government and security agencies to solve this problem in our community once and for all. We can’t continue to live in fear of some young men who have chosen to be thorns in our flesh,”Kingsley added.

The Police Public Relations Officer in the state, Andrew Enwerem, could not be reached for comment as of press time.

Pastor who stole a goat and 9 turkeys finally jailed