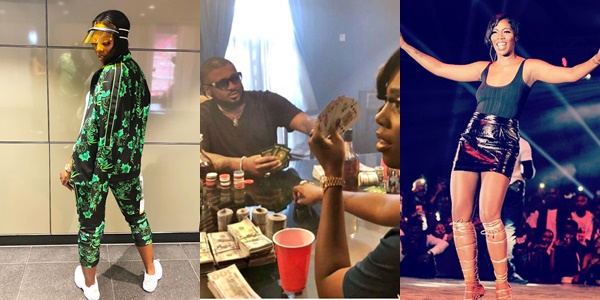 Multi-award winning Nigerian singer, performer and actress, Tiwatope Savage-Balogun, popularly known as Tiwa Savage, has been captured on camera in a controversial photo, on what may be a photo from a new video shoot or probably a movie.

The Mavin Records first lady and mother-of-one, was seen playing cards with Starboy signed artiste, Ceeza Mili. A huge amount of foreign currency, dollars, were also on the table, both left and right as it looked as if they are gambling.

Details surrounding the controversial photo involving the songstress were not ascertained as at the time of filing this report.

From Balogun Market To The World: Viral Photo Of Nigerians Selling Ankara Fabric At The World Cup

‘I love her’ — Iwo monarch relishes Tiwa Savage after divorce

‘You Are Living A Half-Life If You Have Just One Wife’, Says Adamu Garba