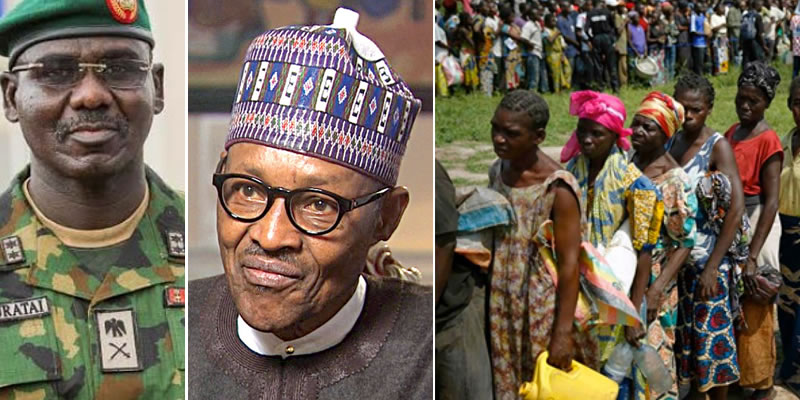 No fewer than 2,000 persons displaced from north east as result of activities of the Boko Haram insurgents are  finally returning  to their ancestral homes from Abuja and environs where they have been living for years.

The IDPS, who were hitherto house in Kuchigoro camp and other annexes in the nation’s capital on Friday, stormed the Unity Fountain to thank the President, Muhammadu Buhari and the Nigerian Army for liberating their villages from the grips of the Boko Haram insurgents.

Speaking on behalf of the former IDP, Mrs Maryam Nuhu, called on the relevant authorities to fish out those who have been sponsoring the Boko Haram sect that had made the country volatile.

Nuhu also saluted the Chief of Army Staff (COAS) Lt. Gen. Tukur Buratai for his tenacity, to make sure IDPs can return home.

She recall with nostalgia, “For years we were displaced persons in our own country, at the Kuchigoro IDPs camp and other annexes in Abuja and neighboring states. The measure of comfort and care provided us almost made us to resign to calling these camps home. But even if we had been quartered in the most glamourous of the hotels in the nation’s capital, the affinity for our ancestral lands would have still pulled us to return home as it did now.

“The only thing that would have kept us away from our home is the terror attacks of Boko Haram that uprooted us in the first place. However, Boko Haram has become history as far as we are concerned. Whatever the terror group is capable of right now is no different from the kind of criminality that can occur on the streets of any of the world’s many towns and cities.

“Our towns and villages have been cleared of these terrorists. We can now confidently return home to pick up our lives from the points where we will meet them. Of course the scars of our losses are there but they are scars that will remind us of the healing that sincere leadership can bring as opposed to the dark side of humanity that Boko Haram its backers want us to know.

“Mr. President, thanks you for making it possible  for us to be returning home. Our sad story took a turn for the better because of the Caliber  of military leaders you appointed.
We thank the Chief of Army Staff (COAS) Lt. Gen. Tukur Buratai for his tenacity. He went the extra mile to ensure IDPs can return home. From him we have the assurance that we will be protected when we get home.

“It is proper that we also appreciate the troops. Their sacrifices, in many instances the supreme price, make it possible for us to be returning home today. We say thank you.
“We want to make meaningful contributions to the economy; we want the Northeast to again be known as a hub for commerce so we need all the incentives we can get to make this happen.

“We therefore call on Mr. President to intensify efforts towards providing whatever infrastructures are still lacking in our places. Mr President should encourage his appointees to support IDPs to return home to start farming, agro-processing, and small scale ventures that will guarantee everyone a quick win.

“We believe that returning home is the right thing to do and that now is the best time to do so. We do not wish for or ancestral lands to become wilderness neither do we want the left over of Boko Haram fighters to get free spaces from where to plot further evil. When our towns and villages are occupied by us we can police them through community effort. But we will require that the Nigeria Police Force maintain a robust presence to complement what the Nigerian Army is already doing.

“In terms of justice, for us it goes beyond the terrorists that have been killer in military operations or jailed after trial. Justice should extend to finding out those that made it possible for Boko Haram to dispense terror. They live in comfort in many Nigerian cities and other world capitals; they enjoy themselves while they made us suffer. Justice would be letting the world know who these people really are and what they did to turn a portion of Nigeria into hell before President Buhari, through the Nigerian Army, redeemed us from the brink.”

The Senior Special Assistant to President Muhammadu Buhari on media and Publicity, Garba Shehu who received the IDPs at the gate said steps are being taken to rescue the country from terrorist using the Nigerian Army.

He said the President is with all Nigerians that have been displaced from their homes.

“There is no day that he doesnt express concern about the plights of the IDPs and he is doing everything possible to relocate them all back to their various communities.

“It is a slow process but with international support, it shall be done, efforts are on to provide infrastructures to the North East to relocate all displaced Nigerians”he said