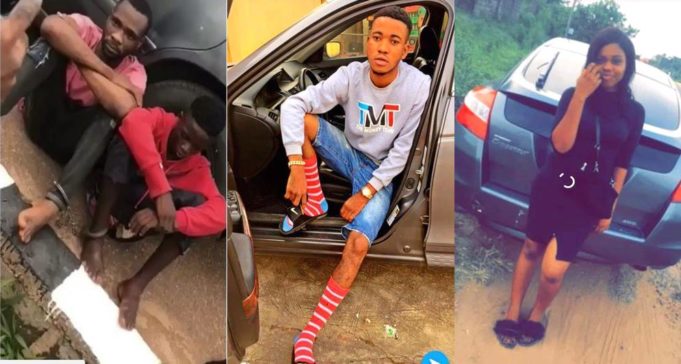 Why I killed OOU student and his girlfriend – Cultist

29-year-old Muritala Babatunde, the killer of Oriade Adebisi aka Oh Dollar, 22, and his girlfriend, Julian Eke Imaga, 18, both students of the Olabisi Onabanjo University, Ogun State, has been arrested alongside one of his accomplices, Taiwo Rasak, 18.

While being paraded yesterday, Muritala, who was caught with the deceased’s iPhone X and two pairs of canvas shoes, said Oriade, who was a “Yahoo boy” and a member of his confraternity, was giving money to a rival cult group.

He also said they did a deal and got a huge sum of money but the deceased refused to give him his cut despite all his moves.

He said, Oriade was recently abducted by another person involved in the deal and the person forced him to pay him his own cut.

He further alleged that the deceased said there was nothing he could do to get his share of the money realized from the deal and that he didn’t also recognize him as the current Number one of the Black Axe Confraternity, Ijebu-North axis.

He said on 28/05/2018 at about 11pm, having noticed Oriade’s movement along Oru-Ijebu junction, he quickly called his gang members: Rasak Taiwo aka IKU (Death) and Sodiq, and Oriade and his girlfriend were kidnapped in his car.

They were taken to the bush along Ijebu-ode Awa/Ibadan expressway where both of them were killed.

He then took his iPhone and two pairs of shoes from him and thereafter abandoned the car at the expressway, having dumped their lifeless bodies in a bush at the back of uncompleted building where they were murdered.

On his part, Rasak, who was initiated into AIYE confraternity in year 2015 when he was just 15, confessed that Muritala called his girlfriend Seun Yetunde, who had been monitoring Oriade’s movement, to bring a bag that contained two guns and a cutlass.

That Muritala gave him one of the guns, handled one and handed over the cutlass to Sodiq while waiting patiently for Oriade to come. Few minutes oriade and his girlfriend arrived in a car.

He added that they took them to the bush along the expressway, where they were killed with planks and gun.