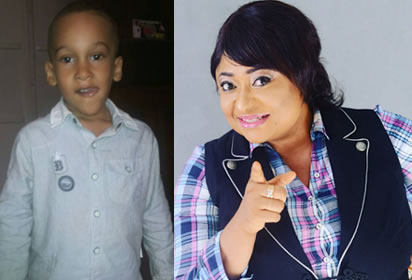 Controversial Actor, Uche Maduagu has taken to social media to defend his colleague in the Entertainment industry, Ronke Oshodi Oke, over the feud between the actress andLiz Anjorin

Ignoring Liz Anjorin, Maguagwu focused on Nigerian cross dresser who took her side. He blasted Bobrisky with his gender issues saying;

When 2 adult are talking a She-Male shouldn’t be interfering… @ronkeoshodioke My attention has been drawn to one slowpoke who is still on a journey to locating where his or her Ancestors submitted his GENDER to, i heard he or she was subtly referring to you as MUMU.

but i guess he or she never literally mentioned your name in his or her foolery and poorly written write ups, this idiot threatened me on #social media, and his or her CASE is before the Nigerian Police force as we speak,and the appropriate security agencies are monitoring his or her social media handle now carefully, he or she can wear as many Cheap bend down select “Bra” or #dress like Miss Nigeria,

its his or her #Body, but any day he or she post any Rubbish about wanting to steal a married woman’s #HUSBAND, or saying he or she wants to marry any male Singer, or any #MALE for that matter, that’s the day he or she will know that there are LAWS in Nigeria against such nonsense #lifestyle…

This is not the first time the Film maker and the cross dresser are at loggerheads. It is a known fact that the two controversial entertainers hate each other and are often quick to lash at each other