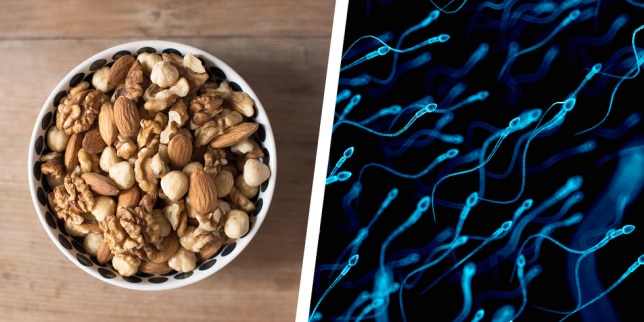 Eating nuts every day could make your sperm stronger

According to a new clinical trial, guys who ate 60 grams of nuts every day for 14 weeks increased their sperm counts

Nuts are touted for as a heart-healthy snack, but scientists have discovered an unexpected benefit of including them in your diet: healthier sperm.

According to a new clinical trial, guys who ate 60 grams of nuts every day for 14 weeks increased their sperm counts. Researchers from Rovira i Virgili University in Spain found that in addition to having more sperm, men who included nuts in their diet had healthiersperm, too.

The team behind this study presented their findings at the European Society of Human Reproduction and Embryology annual meeting this week, The Guardian reported.

For the research, 119 healthy guys between 18 and 35 years old were randomly separated into two groups. The first continued their typical, Western-style eating habits, while the second group incorporated 60 grams a day of mixed almonds, hazelnuts, and walnuts into their diet for 14 weeks. All men gave sperm and blood samples before and after the study, so researchers could determine if the nuts had any impact on sperm health.

Turns out, guys who included nuts in their diet increased their sperm count by 16 percent, on average.

The Most Popular Diet Trends for Men

These men showed other modest improvements, too. The number of live, healthy sperm found in their semen samples increased by 4 percent, while sperm motility increased by 6 percent. Motility is important, because sperm that are better swimmers are more likely to implant and fertilize an egg.

Sperm shape, another factor associated with fertility, improved very slightly in the study – by just one percent. Normal sperm typically have oval heads and long tails, so the more you have that fit this description, the more fertile you are.

Although lead study author Albert Salas-Huetos believes the results are significant, he warns there is still more research that needs to be done before almonds are used to treat infertility issues. The sample size was small and included younger men who consumed a Western-style diet, so the results aren’t representative of all guys. However, Salas-Huetos believes evidence is growing to show that healthy eating habits could impact your ability to have children.

“But evidence is accumulating in the literature that healthy lifestyle changes, such as following a healthy dietary pattern, might help conception, and of course, nuts are a key component of a Mediterranean healthy diet,” he said in a statement.

As studies shows that  nuts aren’t the only food linked that could help your little swimmers. Shellfish, seafood, poultry, cereals, vegetables, fruit, and low fat dairy all been linked to higher-quality sperm.