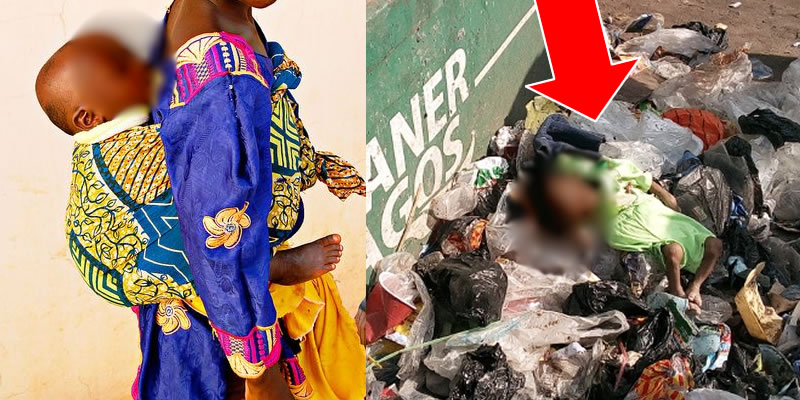 Lagosians woke up to see another shocking action of a ‘mother from hell’. Emotions were raised on Thursday as passers-by cursed an unknown mother who dumped her baby in a refuse dump site in Lagos.

According to News Agency of Nigeria, the corpse of the baby girl was discovered at a dump site at Costain Bus-stop, along Apapa Road in Ebute Meta, Lagos State.

The baby, dressed in a light-green unisex wear with a black cap, looked malnourished. The identity of the mother of the baby was not known as of the time of filing this report.

Reacting, a sympathiser and a resident of Apapa Road told NAN correspondent at the spot where her corpse was that he saw the baby still breathing when he was going to the office in the early hours of the day.

The sympathiser, who pleaded anonymity, said he put a call through to the Lagos State emergency services numbers.

This was to alert the officials of the relevant agency responsible for rescuing children from such an ugly situation to come and rescue her, he said.

He expressed his disappointment that the responders could not rescue the child before her untimely death.

“Imagine this kind of tragedy, if the baby had been rescued on time, she would not have died.

“The Lagos State Emergency Unit has failed us,’’ he said.

Adeolu Aderogba, a trader selling bread beside the scene, said she resumed her morning routine trading around 7.00 a.m. only to discover that the baby was dumped at the refuse site.

“I found the baby on the refuse when I came this morning. Whoever dumped the baby there must be a very wicked person,’’ she said.

She said that babies were precious gifts from God and should be cared for, but some mothers seemed to be careless and morally bankrupt.

Also, Mr Opeyemi Rasheed, a businessman, said that the baby ought to have been buried normally instead of being dumped on refuse.

“A grave should have been dug instead of just depositing the baby by the roadside,’’ Rasheed said.

Mr Steven Yusuf, a mechanic, who condemned the dumping of the remains of the baby girl at a waste bin said that he would report the incident at the Mainland Local Government Area.

“This will enable the council to remove the corpse and give it a proper burial.

“It is not good as the corpse is lying around.

“It can lead to an outbreak of diseases for the inhabitants of the area,’’  Yusuf said.

NAN reports that as of 10.30am, the corpse was still at the refuse dump.

The Police Public Relations Officer for the Lagos State Command, CSP Chike Oti, confirmed the incident and said that the Iponri Police Division had been notified about the baby’s corpse.

Oti told NAN that the police was taking action, but added that no arrest had been made in connection with the matter.