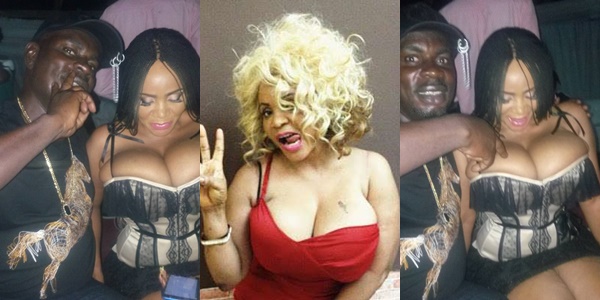 According to Cossy who broke the news on social media, she had told Baba Fryo that looking at her boobs was for free but he would pay if she allowed him touch her boobs, which he eventually did, but has since refused to pay after touching them.

“After all the talks, Baba Fryo finally touched my boobs as agreed but no alert yet. Biko send the money. I’m planning to storm Ajegunle City to collect my money”, she wrote.

When Showtime reached out to Baba Fryo to confirm the allegation, he confessed to touching Cossy’s boobs but denied any agreement to pay for the act.

“Cossy is my friend, a very good friend at that but I believe this is a private issue. Yes, I touched her boobs but there was no agreement to pay for touching her boobs; we were just catching fun. Meanwhile, let’s wait till she invades my house to ask for her money because this whole thing is just so funny. Left to me, the whole thing was just fun, it’s nothing serious at all, no strings attached”, he said.
In a chat with Showtime, Cossy confirmed that though she was messing around with Baba Fryo, he agreed to pay for touching her boobs.

Obesere opens up on alleged affair with Cossy Orjiakor

“We were actually just playing around; though I told him that looking at my boobs is free but to touch requires paying big money. He said he would pay that he has the money, so tell him to pay my money, any amount; he should pay it into my account.

Though it seemed like a joke but at least he should pay; how can he say he would give me money and later refuse to give me, does it make sense? It’s just like me telling you to allow me eat your apple and buy you another one but later refuse to. Though we didn’t agree on a particular amount but he should pay me, it doesn’t matter how much”, she said.

Why I’ll forever be grateful to Davido —Yonda

Obesere opens up on alleged affair with Cossy Orjiakor

My marriage may not last a month – Cossy Orjiakor