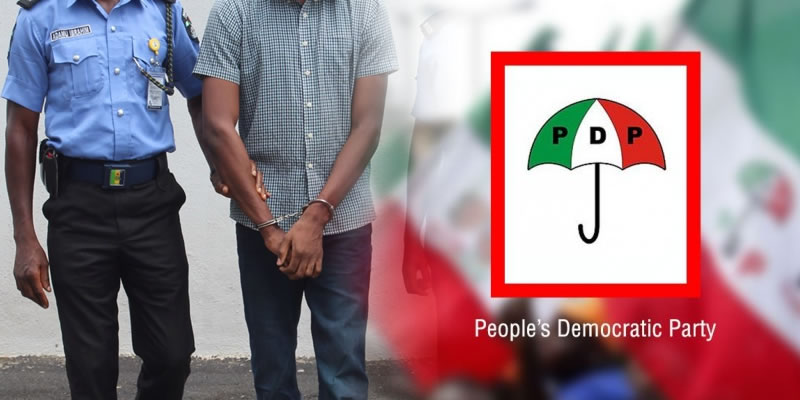 The Lagos State Police Command, on Sunday, said it has detained for interrogation five chieftains of the Peoples Democratic Party in the state.

The arrest was confirmed by the command’s spokesman, CSP Chike Oti in a statement, stressing that what was supposed to be a peaceful political meeting of Peoples Democratic Party (PDP) members ended in unnecessary killing of one Mr Borishade Adeniyi, Chairman , PDP Apapa Chapter.

“In a swift reaction, the Commissioner of Police, Lagos State, CP Imohimi Edgal, directed the Area Commander in-charge of Area ‘J’ Elemoro, to ensure the arrests of all those involved in the crime.

Oti said that the five suspects have been transferred to SCIID, Panti, for further investigation.

He stated that the incident took place on Saturday, at about 6 p.m. during Lagos State PDP Visitation meeting at Igbosuku Village, Eti-Osa LGA, attended by Lagos State and Local Government PDP Chairmen.

The image maker noted, however, that towards the end of the meeting, fracas broke out between contending factions of the party; one faction for the State Chairman, Mr Moshood Sabadon and the other for the Eti-Osa LG Chapter Chairman, Engr Kehinde Fasasi.

Oti said during the fracas, the deceased, recognised also as the doyen of PDP LG Chapter Chairmen in Lagos State, was allegedly shot and injured on the leg.

“He was rushed to First Consultant Hospital, Obalende, Lagos, where he was treated but eventually died. Corpse of the deceased is deposited in the hospital mortuary.

“ Two other persons allegedly injured during the clash, are also receiving treatment in a hospital in Ajah,” he said

The spokesman said CP Edgal was worried about the use of firearms and the frequency of violence involving the PDP in the state, warning that no political party will be allowed to truncate the peace in the state.

“He, therefore, calls on all political parties in Lagos to disarm their members as nobody without necessary authorisation is permitted to bear firearms. He said that henceforth, political party leaders will be liable,”Oti quoted the CP as saying.

They were arrested with two pump action rifles they claimed were given to them by one Mr Dipo Olorunrinu, a member of PDP in Lagos State House of Assembly, to escort him to a political rally.

He said the state lawmaker was arrested and the two suspects, are all helping the police in the investigation of the case.