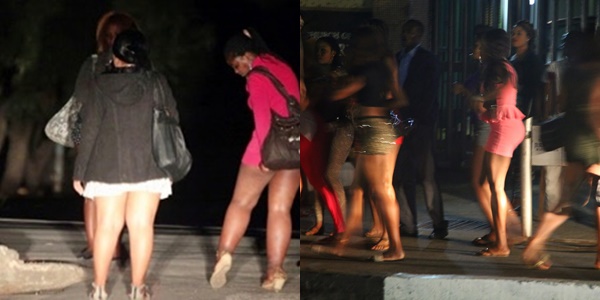 Lagos Prostitutes Reveal Why Married Men Love To Patronize Them

Some prostitutes in Lagos had revealed why married men hire them for sexual satisfaction.

In some of the hotels and brothels PM express visited in Ejigbo, Yaba, Mushin, Ikotun, Shasha, Idimu and Agege areas of Lagos, the commercial sex workers revealed why married men are their favourite clients.

According to PM Express, one of the sex workers, simply known as Jennifer, who operated as a worker in Shasha area of Lagos said that most of her clients were married men. She said that even though she used to collect good money from them, she still pitied them as their wives were not taking care of their emotional needs at home.

She narrated that one of her clients opened up and complained that he got married some years ago and they had three children. But that since then, the wife had practically abandoned him and faced the children without knowing that he needed care as well as the children.

Jenifer said that as a graduate, she knew what those men needed and they were not getting them in their different homes. She then worked on them; they stuck to her and had been paying reasonable money unlike the single men who came with many fake stories.

13-year-old girl, 23 other ladies trafficked from Akwa Ibom for…

She further narrated that she had three regular married clients and whenever they came, she made sure that she treated them well. She said that she usually spent good time with them, chatted them up generally, and then attended to their sexual needs which they lacked in their homes and at the end they paid her reasonable money.

Another, Miss Grace, revealed that married men were preferable because they considered and appreciated the workers more than the single men who may not want to pay at all or pay more. She however noted that dealing with married clients was a huge task, as such workers must have patience in order to treat such clients well and at the end the patience will be worth the pay as they will pay good money for the service and become regularly clients eventually.

She observed that married men preferred them because of the attention and time they usually gave to them which they were not getting from their wives in their various homes and once they got them from the workers, they get stuck to them. She said that some even got carried away and proposed to marry her but she usually declined because marriage was not part of why they became workers but money to cater for other things.

Another worker, Miss Chizoba, equally agreed with her colleagues’ assertion on married men but added not all were good clients as some may come and start telling woes of their wives at home; even making terrible demands and may not have the money to match what they want from them.

Some other workers who spoke had almost the same opinion and noted that the married clients preferred to stay longer with them because they find solace and enjoy themselves more any time they come around unlike in their homes. One Miss Anita equally noted that not all married men was worth the time because some may come and after wasting a lot of time may end up not paying the appropriate amount worth the time wasted.

Some of the patrons our reporter met at some of the joints declined to comment on the matter as they considered their coming there to patronize the workers top secrets and private lives away from their wives which should not be made public.

However, a patron at a popular hotel along Ejigbo/Ikotun Road, simply known as Emman, said that there were many reasons married men patronised those sex workers and most times they were full of excitement and fun.

Emman explained that he was not getting the needed attention from his wife at home. He mentioned it to his friend and he introduced him into that kind of lifestyle. He said that he embraced it and since then had been enjoying it. He noted that it was not that he did not love his wife but there were things he was getting from the workers which he realised that he was not getting from her.

Mr. Emman cited that sometimes he may prefer to forget all the financial and family pressures which he will not get when he was with his wife as she will only help compound them. Hence, he will find his way to the hotel and will temporarily forget them.

Another patron, Mr. Peter, said that no man will ordinarily like to go to the hotels to fraternize with sex workers if his wife was rightly taking care of his emotional need at home. He noted that hotel life was expensive but it was also fun and difficult to give up.