Kunle Afolayan Teaches His Son How To Pound Yam (Video)

Ace Nollywood Actor and Producer, Kunle Afolayan, can’t thank his mother enough for passing on the skill of pounding yam to him.

Kunle Afolayan who also disclosed that his mother made his useful in the kitchen, shared a video of him passing on the skill of pounding yam to his son. The video came with the caption; 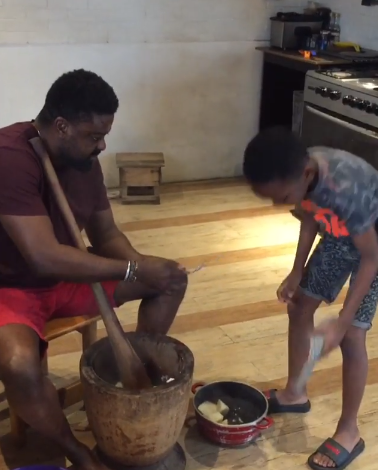 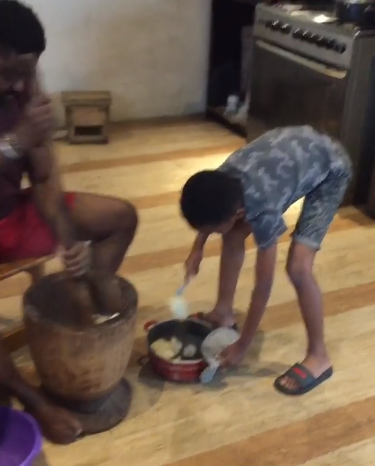 I can only thank Maami for teaching me to be useful in the kitchen. Am passing it on. Iyan ati efo riro loading

I can only thank Maami for teaching me to be useful in the kitchen. Am passing it on. Iyan ati efo riro loading #poundedyam #iyan #lunch #food

The movie director and actor had before now disclosed that takes care of his family and is not an absentee father.

When asked how he strikes balance being a father, husband and a filmmaker, he said:

Well, I have been balancing it. They have not complained and it has to be like that forever. They enjoy more than those who see their father every day. What if I am there 24/7 and can’t provide for their needs? I am not an absentee father because I look after my family.

He had also slammed his brother, Aremu Afolayan for saying that their father was poor. Aremu had insisted that he came from a poor home.

“My father was never a rich man; he only made money but never had money. Whenever he made money, he spent it almost immediately.

“He did not have money because he did not have investments. He did not leave anything for me, but he made me work and earn a living for myself. If he had left something, maybe I would have grown better than this, but it has taught me that I would not do the same to my children. My father was only famous but he was never wealthy.

“I was born poor but I don’t know if my other brothers would say otherwise but I know that I was born poor in a makeshift wooden face-me-I-face-you house in a very poor area. Rich people never affiliated themselves with us or allowed their children to play with us…”

“Do you know Ade Love? Was Ade Love a poor man? That is his (Aremu’s) own opinion as everyone has a mind of their own. I would not say things were rosy, but we were never poor. If your parents were able to give you quality education and you enjoyed some luxuries that a lot of people didn’t have access to, then you cannot openly say you come from a poor home.

“I am sure I didn’t come from a poor home. Though I cannot speak for anyone, I just think he (Aremu) is stupid. I didn’t get to see the story.

“Funnily, some people thought I was the one who granted the interview. When the General Manager of Eko Hotel told me he read my interview in PUNCH, I was surprised because I didn’t grant any interview recently. Whenever I see the man again, I will let him know it was not me he read; it is a misrepresentation.”