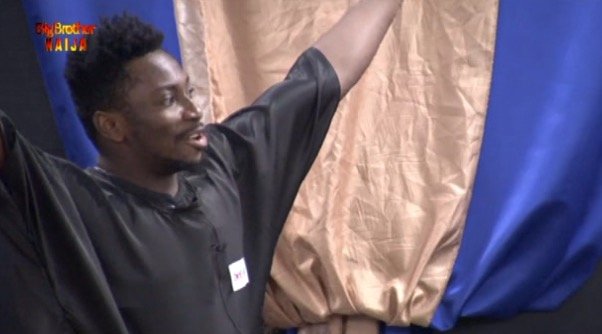 The game started at 9pm and Biggie explained the rules of the game. Frodd was first and he completed the course in 3 minutes, 58 seconds. He was penalised with an additional 30 seconds making it 4 minutes, 28 seconds for flouting the rules.

Next was Esther, who finished in 5 minutes, 19 seconds. She got a sweet reward in the form of a kiss from Frodd for her effort. Diane was next but couldn’t finish the game in the allocated time.

Venita was a bundle of surprise as she set a new record of 2 minutes, 40 seconds.

Venita with the new record to beat.

Elozonam finished in 3 minutes, 4 seconds but got an additional 30 seconds to his time for flouting the rules. Omashola completed the course in 2 minutes, 54 seconds.

Tacha completes her challenge, but gets an extra 30 seconds penalty.

Seyi completed it in 3 minutes, 8 seconds. Ike broke Venita’s record as he finished in 2 minutes, 19 seconds. Khafi finished in 5 minutes, 13 seconds with an additional top-up of 30 seconds.

Sir Dee was last on the course and he finished in 1 minute, 39 seconds. In the end, Sir Dee was announced the winner and Ike as the runner up.