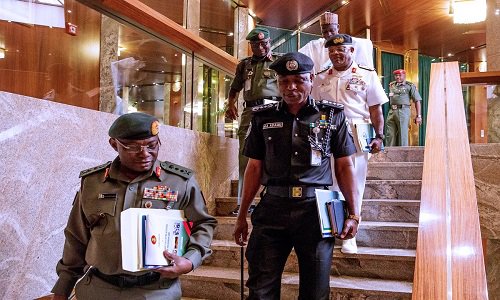 Taraba killings: Why panel’s report was not submitted on Friday – Joint Panel Probe

The Joint Investigative Panel established by the Defence Headquarters (DHQ) on the order of President Muhammadu Buhari to probe the killings of three police operatives and a civilian in Taraba State failed to turn in its reports on Friday.

According to The Nation reports, sources at DHQ Abuja told our correspondent that the Panel members are yet to put finishing touches to their reports, adding that given the volume of works before the Panel, there was no way they could turn in their reports immediately after grilling all the principal suspects, soldiers, policemen and civilians connected to the matter.

The source added that besides the material evidence including videos recordings and the statements made by the suspects, the Panel had to examine bank statements and other relevant documents of suspects to be able to establish strong cases against all the actors in the matter.

The Panel which is headed by Rear Admiral Ibikunle Olaiya is believed to be working on putting all the material evidences together at the Headquarters of the Defence Intelligence Agency (DIA), Abuja where it interrogated policemen, soldiers, civilians and the re-arrested Taraba kidnap kingpin, Alhaji Hamisu Bala Wadume.

It was gathered that soldiers linked with the matter have been in military detention since the first week of August and they are not likely going to be left off the hook until the report of the Panel indicate the levels of their culpability and otherwise.

The Panel it was further learnt extended its probe to officers and soldiers at the Nigerian Army 23 Brigade, Yola, which controls 93 Battalion, Takum, Taraba State. Civilians and policemen connected to the case were also interrogated by the Panel.

Meanwhile, the Chief of Army Staff, Lt. Gen Tukur Buratai is said to be awaiting the recommendations of the Army Department of Transformation on the need to fish out bad eggs in the military and show them the way out.

Sources at the Army Headquarters, Abuja , said the issue of military discipline, professionalism, commitment to service rules and sound ethical conducts have continued to raise concerns among military leaders in recent times considering the levels of involvement of soldiers and even some officers in various misconducts and unethical practices.

The source who spoke on condition of anonymity said the leadership of the army is poised to ease out bad eggs as soon as they are fished out, adding that they would not only be dismissed but they would be prosecuted according to service rules.

He further said the army authorities are also worried about recent events in the country that portrayed the institution in bad light, saying it was on the strength of such development that the Army quickly acted on the case of the killing of a commercial motorcyclist, Mr Chimaobi Nwogu in Abia State by Cpl Ajayi Johnson.

He added that the authority not only dismissed the soldier, but handed him over to the appropriate security agency for prosecution.

Said the Source: “ You will agree with me that the last three months has been very difficult and tasking for us in the Army. You recall the case of soldiers linked with a GOC who were on escort duty of a VIP and then they were reported to have abandoned their duty and absconded with millions of naira.

“We are yet investigating that matter, then you suddenly had of the case of Wadume in Taraba and the unfortunate killings of three police operatives and a civilian. We were shock at the revelations that followed that incident.

“And of course you know we have to follow established procedures in the military. But this particular case portrayed us in bad light. In fact, I think it was the same week that another soldier was said to have raped a university student. It was a trying moment for us. But we are doing a follow up that will purge the military of bad eggs.

“I can assure you that the army authorities are not taking this matter lying low. We have had series of meeting. But there are issues we have to iron out. First, is the on-going investigations by the DHQ Panel on Taraba kidnapper and the alleged involvement of soldiers and officers in it.

“After the Panel’s report, you will see action. However, let me also say that the authority is placing high premium on soldiers and officers who perform gallantly and professionally in line of duties. They will be recognized and rewarded accordingly. It is a two way thing as far as we are concerned.”

It will be recalled that the Chief of Army Staff, Lt. Gen Tukur Buratai had at a Workshop on Transformational Leadership in Abuja in June this year warned that the Army would do all that is necessary to fish out bad eggs whose willingness to remain in the service has waned.

He told military leaders not to wait for bad eggs within the service to get out of the way, but that they must be fished out and sent packing.