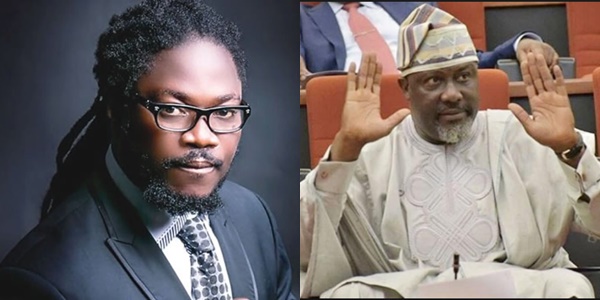 Daddy Showkey has described Kogi West Senator, Dino Melaye as a liar. The musician said this while reacting to Melaye’s revelation on how he escaped from gunmen who allegedly tried to kidnap and assassinate him, last week.

Gunmen had allegedly attempted to abduct the lawmaker in Gwagwalada area of Abuja, last week. Shortly after the incident, Bayelsa Senator, Ben Bruce confirmed the incident, saying Melaye was kidnapped by gunmen.

While Nigerians were still in the euphoria of the news of Melaye’s abduction, the lawmaker surfaced with a narrative on how he managed to escape.

Melaye said he hid in a tree after he was attacked by the gunmen for 11 hours.

He said, “I jumped into the bush, and I started running. They pursued me and I was able to outmanoeuvre them and climbed a tree.

“I was on top of the three when I saw them run past looking frantically for me. When they didn’t find me, they also ran back.”

However, rubbishing Melaye’s claim, the veteran singer, who shared a video of the Senator narrating how he escaped on his Instagram page wrote: “ Compo 1, Oba Liar 1, Lie lie Master, Our Oga. Lie lieoooo. You too much.