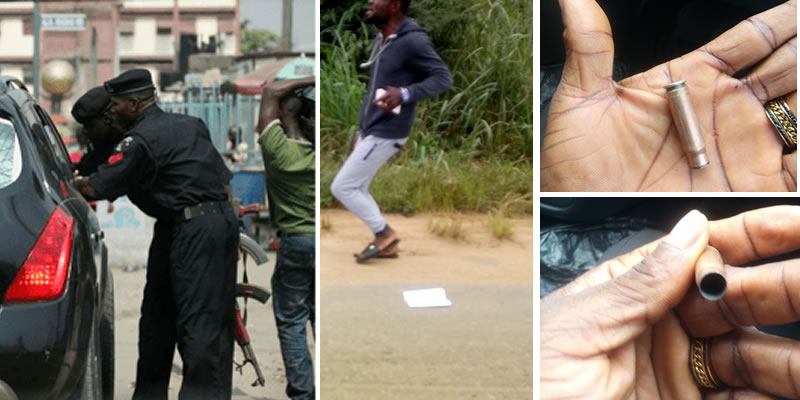 Metro Patrol Police shot the young man while trying to intimidate his driver to bribe them in Agulu, Anambra state.

A man has been shot dead at Agulu, before the Unizik campus in Anambra state by men alleged to be police officers.

Pandemonium broke out at Agulu on Tuesday after a bribe-seeking policeman shot dead a businessman, Chinonso Onyeme.

A family member of the father of four, who spoke to our correspondent on the telephone, said Onyeme gave up the ghost at the Odumegwu Ojukwu University Teaching Hospital, Amaku, where he was rushed to for treatment.

He suddenly broke down in tears and could not continue the conversation.

An eyewitness, Ngini Ebelechukwu, said the victim was shot by a cop who was in a team of 10 bribe-seeking policemen.

The policemen were said to be in two navy blue Hilux vans with the inscriptions, ‘Metro Patrol Police, Awka.’

The witness, whose vehicle had been previously stopped by the policemen, said he had been held for about 20 minutes as the cops insisted on collecting a bribe from him.

He said, “I am a sales rep for a table water company. My driver and I were travelling from Awka to Okwo to deliver cartons of table water to a customer when the policemen stopped our Ford bus.

“They demanded the vehicle documents and the driving licence of my driver, which we gave them. They looked at the licence and said it expired in July. I told them that it was just seven days into the new month and the process to get a new one had begun.

“However, they were not satisfied and rudely demanded that I gave them money. I pleaded with them, but they said I was talking trash.

The 29-year-old noted that despite telling the policemen that his business was time-bound and he could lose his customer if they did not release him on time, the cops were adamant.

Ebelechukwu explained that while waiting, a Mercedes-Benz approached and one of the policemen cocked his rifle and aimed it at the car.

“You need to see the way they were harrasing motorists. They were rudely demanding bribes from people and had confrontation with more than six motorists.

“While I was talking, a Toyota Sienna left a filling station almost opposite to where the policemen were. The driver drove slowly; but to my shock, the policeman who had attempted shooting at the Mercedes-Benz stood in front of the Sienna. He aimed his rifle at the vehicle and fired a shot. He was not under any threat or attack and the vehicle was not speeding. I have never witnessed such a thing in my life,” he added.

The witness said one of the occupants, who had bloodstains on his clothes, ran out and started screaming in Ibo that his friend (Onyemeh) had been hit by a bullet.

“I asked the policeman who fired the shot why he shot and he said, ‘If you take a step closer, I will kill you.’ The policeman holding my vehicle documents threw them at me as they hopped into their vans and fled.

“As they were leaving, some people pursued their vans. The brother of the victim told me that they had just eaten at a restaurant at Agbolo and were going to Awka. He called me later that the man was dead,” the witness said.

Our correspondent learnt that the incident was reported at the Central Police Station.

As of press time, newsmen learnt that the atmosphere of Agulu, where the victim hailed from, was charged, as Onyeme’s family members took his remains to the Central Police Station.

The Police Public Relations Officer, Mr Haruna Mohammed, in a text message, said the police would investigate the incident.

“The command will investigate this alleged professional misconduct and deal decisively with any police officer found wanting in accordance with laid down procedure,” he said.