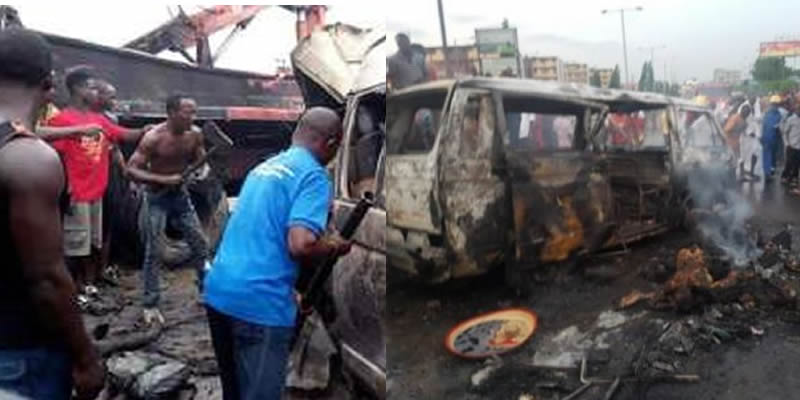 13, including naval officer burnt to death, in Rivers road accident

Not less than, 13 persons, including a naval officer lost their lives in a fatal road accident when a Hiace bus loaded with 14 passengers was involved in a head-on collision with a pail loader along the Emohua area of the East-West Road in Rivers State.

According to reports, most of the passengers in the bus who were travelling to Lagos on Thursday morning, were burnt beyond recognition as the bus went up in flames, presumably due to the impact of the collision.

The pail loader, it was learnt, skidded off the road and swerved onto the path of the oncoming bus.  A woman, who was identified as a naval personnel, was among those who lost their lives in the road accident, which happened after Choba Bridge.

Sources said the bus had loaded at Rumuokoro in the Obio/Akpor Local Government Area of Rivers State and was almost getting to Ahoada before it collided with the pail loader. Confirming the accident, the Rivers State Police Public Relations Officer, Mr Nnamdi Omoni, said the only survivor had severe burns and had been rushed to a nearby hospital.

Omoni said, “I got the report of a fatal motor accident after Choba, along the East-West Road, where a pail loader skidded off the road and had a head-on collision with an oncoming bus. The bus was conveying passengers to Lagos. The bus went up in flames and all the passengers, except one, were burnt beyond recognition. The person who survived had severe burns and he is said to be in the hospital for medical attention while the charred remains of those burnt had been gathered and taken to the University of Port Harcourt Teaching Hospital for preservation.”

The police spokesman, however, said a team of security operatives had been dispatched to the accident scene in order to forestall a breakdown of law and order.

“Operatives of the Rumuji Police Station are there on guard and trying to ensure that there is no security breach as a result of the accident and also to prevent anybody from taking advantage of the situation to perpetrate crime,” he said.