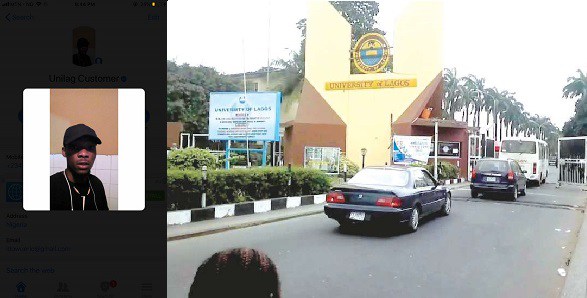 Eric Idowu is an undergraduate student of the University of Lagos (UNILAG), he has been accused by one Azeez Bakare, a Youth Corp Member of absconding with phones valued at N1million. He had allegedly purchased the products with a fake credit alert.

Punch Metro learnt that Idowu had on Thursday allegedly used a fake name, Leonard Adegoke to order for the items from the Youth Corp Member.

Bakare, the Youth Corp Member said Idowu had remained elusive since the items were delivered to him at his house.

Read Bakare’s account of his ordeal as reported by Punch,

“Apart from being a corps member, I run a mobile phone business. On Thursday, August 2, around 4.30pm, I received a call from a customer, who identified himself as Leonard Adeleke. He ordered for three used iPhone 8 Plus and one brand new iPhone X. The address he gave me was no 20, University Road, Abule-Oja, Yaba, Lagos. I went there to deliver the goods around 7pm the same day.

“When I got there, I followed him to the front of his room where he checked the phones to see if they were working perfectly. After he was convinced, he collected the phones and asked for my account number, which I provided. A minute later, he showed me a debit alert on his phone and said the money had been transferred into my account.

“Both of us waited for me to receive the alert on my phone. While waiting, he said he wanted to go downstairs to turn on his generator. That was the last time I saw him as he ran away. When I searched around and could not find him. I called his telephone number, but it was switched off.”

Bakare, who said he had petitioned the Sabo Police Station on the incident, noted that one Adeleke Adegoke who lived in the house had been arrested.

“Later, I used the True Caller app on my phone to dial the number Leonard Adegoke used in placing his order. The app revealed his picture and real name as Eric Idowu.

“I showed Adeleke, who recognised Idowu from the picture. Adeleke said Idowu used to stay with the landlord’s son but had disappeared,” he added.

Bakare said it was after Adeleke had called the landlord’s son at the station that the police got a detailed information on Idowu, who was said to be an undergraduate at the University of Lagos.

“I also went to the Computer Village in Ikeja to meet with officials of the phone company because they had reported the case to SARS. I later wrote that the case should be transferred from the Sabo Police Station to SARS.

“I have informed my parents about this case. Till now, I have not paid for the phones, which I got on credit from a phone company, CSE Phones. I want the police to help me get Idowu. I want my goods back or my money and the extra cost I have spent to recover them,” he added.