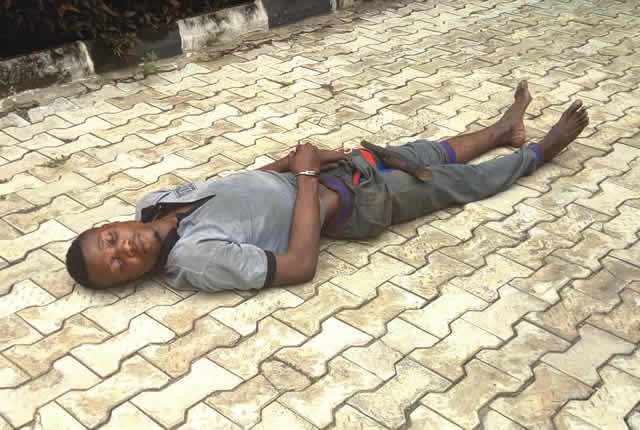 A suspected kidnapper whose identity has yet to be confirmed by the Ondo State Police Command was still sleeping six days after he was taken to the police custody.

The Kidnapper was arrested by men of the command on Sunday as he and three other members of his gang attempted to kidnap a pharmaceutical shop owner in Owo town.

According to the police, the three-man gang stormed the shop with guns with the intention to kidnap the owner, but the victim raised the alarm and escaped through the back door.

The police explained that the suspect tried to escape on a motorcycle but stumbled while he was trying to ride it. He reportedly snatched the motorcycle from a customer of the shop owner.

The other members of the gang were said to have taken to their heels.

The police stated that a 400mg tablet of Tramadol was recovered from the pocket of the sleeping suspect which raised the suspicion that he must have taken the drug before he went for the operation.

The State Police Public Relations Officer, Mr. Femi Joseph, who spoke to our correspondent on Friday, said the suspect had yet to wake up.

He said, “As of today (Friday), the suspect had yet to wake up. Maybe he took too much of the drug, that is why he is still sleeping. We have tried all we could to make him regain his consciousness to no avail.

“However, we are still watching him to find out if he is pretending. We are with him and he would face the music no matter how long he is unconscious.”